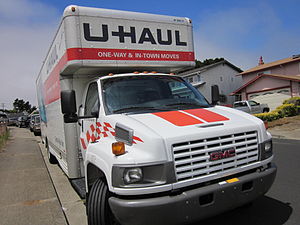 One of the best indicators of a state’s economic health, according to John Merline, writing in Investor’s Business Daily, is the “U-Haul Index” (first publicized by economist Mark Perry) to see what people are paying to move into, or out of, the state. Renting a 20-foot truck one-way from San Francisco, California to San Antonio, Texas, for example, costs $1,693. Going in the other direction, however, only costs $983 for the same truck.

The American people and businesses are voting with their feet and their one-way truck rentals to escape California and its forced unionism, high taxes, and high unemployment rate for a better life in low-tax, business-friendly, right-to-work states like Texas.

They have lots of reasons to leave. According to the Tax Foundation, “Tax Freedom Day” arrives earlier in Texas than it does in California, due to its zero individual and corporate income tax and lower sales tax. Put together, Texas’ state and local tax burden is less than 8 percent of income, well below the national average of nearly 10 percent, while California’s is almost 12 percent.

This enormous disparity puts California 48th out of the 50 states in the foundation’s overall business tax climate index while Texas ranks 9th.

It isn’t all about taxes, however. Its regulatory environment and yawning fiscal deficits are chasing companies away to more favorable locales. Part is the state’s determined efforts to increase still further its tax burden on high income earners – now an astounding 13 percent – along with its implementation of policies favored by the Obama administration in Washington. As Joel Kotkin of NewGeography.com put it,

California will serve as the prime testing ground for President Obama’s form of post-economic liberalism. Every dream program that the Administration embraces — cap and trade, massive taxes on the rich, high-speed rail — is either in place or on the drawing boards.

Despite the state’s efforts to redistribute the wealth from those who earned it to those who didn’t, “the ranks of the poor have swollen to the point that the state, with 12% of the nation’s population, accounts for one-third of its welfare cases,” notes Kotkin.

In their study, “The Great California Exodus,” Manhattan Institute’s authors Tom Gray and Robert Scardamalia looked not only at how many are leaving, but where they’re going and why. Since 1990 California has lost nearly 3 ½ million residents, most of them moving to southwestern states like Texas, Nevada and Arizona.

They blame this out-migration on California’s “chronic economic adversity” as well as its density: Los Angeles and Orange County have a population density of nearly 7,000 people per square mile, more than either New York City or Chicago. A third factor is what they call the state’s “constant fiscal instability” and the likelihood that its continued spending beyond its means will result in even higher taxes in the future.

Put altogether, then, the authors conclude

The U-Haul Index has been confirmed in each of the last eight years by Chief Executive magazine in its annual survey of CEOs:

Texas easily clinched the No. 1 rank, the eighth successive time it has done so. California earns the dubious honor of being ranked dead last for the eighth consecutive year.

The magazine notes the obvious:

California’s enduring place of perpetual decline continues in this year’s ranking. Once the most attractive business environment, the Golden State appears to slip deeper into the ninth circle of business hell. The economy, which used to outperform the rest of the country, now substantially underperforms.

And its status as the most ruinously contentious place to operate remains undisturbed in eight years. Its unemployment rate, at 10.9 percent, is higher than every other state except Nevada and Rhode Island. With 12 percent of America’s population, California has one-third of the nation’s welfare recipients.

Each year, the evidence that businesses are leaving California or avoid locating there because of the high cost of doing business due to excessive state taxes and stringent regulations, grows.

The U-Haul index is right: more and more people think it’s worth it to pay extra to get out of California.

Environment Freedom Income Tax Obama Spending Taxes Unemployment
This entry was posted on Thursday, November 22nd, 2012 at 7:00 pm and is filed under Economics. You can follow any responses to this entry through the RSS 2.0 feed. Both comments and pings are currently closed.
Many of the articles on Light from the Right first appeared on either The New American or the McAlvany Intelligence Advisor.