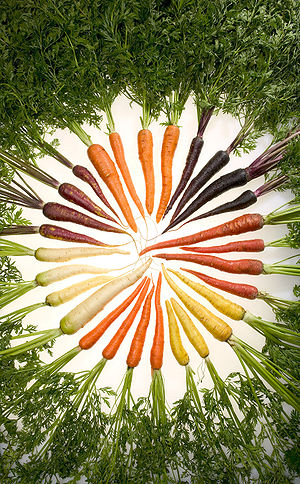 This is the first I’ve heard of this. In his article, Dan Mitchell (a writer and scholar at Cato) has not only shed some light on “austerity” in Spain, but also into peoples’ thinking about how to cope with it.

The problem is simply: onerous and in some cases, devastating taxes. Some are so high that they are threatening business survival. Businesses are people organized. If a business goes away, people suffer. That’s why I like the phrase “small business owners” rather than “small businesses.”

Quim Marce owns a theater in a small village in Spain. He depends on it for his and his family’s subsistence. And when the government raised the value-added tax to 21 percent on theater tickets, he saw the handwriting:

This is the end of our theater…

I thought, we’ve got to do something, so that we don’t [have to] pay this 21 percent…

He had an idea: sell carrots instead of tickets! Under a quirk in the law, the tax on vegetables is only 4%:

We sell one carrot, which costs 13 euros [about $16 American!]…but then we give away admission to our shows for free. So we end up paying 4 percent tax on the carrot, rather than 21 percent.

The media is all over this, as might be expected. And Mitchell gives Marce’s idea “two cheers” instead of three. He explains:

Well, as much as I admire non-compliance when tax systems are too onerous, I suspect that these Spaniards are protesting against the idea that they should pay for big government, but I wouldn’t be surprised to learn that they very much support a bloated welfare state [as long as] someone else is picking up the tab.

But I’ll still give them two cheers because I’m in favor of just about anything that will reduce the amount of money diverted to finance government.

Spain The New American
This entry was posted on Monday, November 19th, 2012 at 6:09 am and is filed under Economics. You can follow any responses to this entry through the RSS 2.0 feed. Both comments and pings are currently closed.
Many of the articles on Light from the Right first appeared on either The New American or the McAlvany Intelligence Advisor.