Will Ted Cruz be Assimilated into the Beltway Borg? 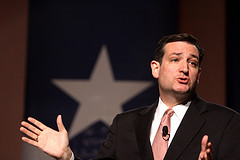 First indications are hopeful: Ted Cruz won his Republican primaryagainst an establishment-backed candidate handily, 57-43 percent. He won the general election as an avowed Tea Party favorite. But he has some things working against him, and I fear that he will be assimilated by the Washington Borg. First, he is a lawyer, having first attended Princeton and then Harvard Law, a great recruiting ground for leftists. Secondly he used to work for the Federal Trade Commission. Thirdly he was a domestic policy advisor to that great champion of freedom, George W. Bush. So he’s too close to the establishment for my comfort.

But he is making a grand entrance:

It depends if we have the president from the campaign trail or the president from the last four years in office. I can tell you, speaking personally, and I  obviously can’t speak for anyone other than myself, if the president is serious about tackling the grave fiscal and economic challenges in this country, about reducing our debt and deficit and getting people back to work, I will happily work with him.

Knowing what we know about Obama, that makes me nervous. It’s like offering to sleep with the enemy.

But then he said:

On the other hand, if he insists on continuing down this same path of more and more spending, more and more debt, higher taxes and more regulation, then I intend to work day and night to stop us from continuing down that path because I think that path has been and would be deeply damaging to the economic strength of our nation and deeply damaging to the millions of Americans  trying to find jobs.

I’m holding my breath on this guy and hoping for the best. But I’m skeptical…

Deficit Establishment Republican Taxes Tea Party Ted Cruz
This entry was posted on Monday, November 19th, 2012 at 11:09 am and is filed under Politics. You can follow any responses to this entry through the RSS 2.0 feed. Both comments and pings are currently closed.
Many of the articles on Light from the Right first appeared on either The New American or the McAlvany Intelligence Advisor.