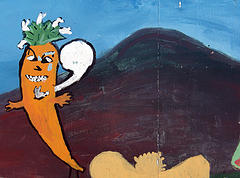 When Spain’s new Prime Minister Mariano Rajoy violated his campaign promise not to increase the top Value-Added-Tax (VAT) rate and instead increased it to 21% last summer, Quim Marce knew he was in trouble. His little 300-seat theater in the village of Bescano had been forced to charge a VAT of 8% on each ticket, and the new rate would keep his customers away. With unemployment at 25% in Bescano, he knew that his very livelihood was threatened. He told National Public Radio (NPR) reporter Lauren Frayer:

This is the end of our theater…we’ve got to do something so we don’t pay this 21 percent, and we pay something more fair.

Frayer exercised some literary license, no doubt, and explained that while gazing out a window one day, Marce got an idea: sell carrots which are only taxed at 4 percent as a staple and give away free admissions to his shows:

We sell one carrot, which costs 13 euros – very expensive for a carrot [$16.50!]. But then we give away admission to our shows for free.

So we end up paying 4 percent [VAT] on the carrot, rather than 21 percent, which is the government’s new tax rate for theater tickets.

Now Marce is getting national notoriety, and his theater is full. He even makes a joke about the carrots:

There’s always an announcement before the show begins that says photos are not permitted and that you should turn off your cell phone.

So now we’re going to add: No chomping loudly on your carrots during the show!

Dan Mitchell, a senior fellow at the Cato Institute, only gave Marce “two cheers” for protesting the increase in the VAT:

As much as I admire non-compliance when tax systems are too onerous, I suspect that these Spaniards are protesting against the idea that they should pay for big government, but I wouldn’t be surprised to learn that they very much support a bloated welfare state [as long as] someone else is picking up the tab.

It’s just a matter of time before the tax authorities discover the fraud and bring down the hammer on Marce. After all, it’s tax evasion, and therefore it cannot be allowed to continue. As economist Fernando Fernandez, a professor at Madrid’s IE Business School, put it:

This means that people who do pay taxes have to pay a larger tax. And this makes it more difficult to get the fiscal target [being mandated by the European Union and European Central Bank].

So we have to denounce this just as much as we denounce the filthy rich who don’t want to pay taxes. We should do the same.

These sentiments ought to sound eerily familiar to students familiar with Shay’s Rebellion in Massachusetts in 1786-1787. Noting the incipient rebellion against taxes being imposed on poor farmers, President George Washington said:

What a triumph for the advocates of despotism [it would be], to find that we are incapable of governing ourselves and that systems founded on the basis of equal liberty are merely ideal and fallacious.

Daniel Shays, a poor farm hand, joined the Continental Army, fought at Lexington and Concord, Bunker Hill and Saratoga, and was eventually wounded. He was never paid his promised wages and resigned from the army in 1780, returning to Massachusetts only to discover that he was being sued by the state for nonpayment of taxes. He discovered others in similar circumstances and began to organize a rebellion. So successful was Hays in eliciting support for his rebellion that on September 2, 1786, when Massachusetts Governor James Bowdoin called up the militia to put down the rebellion, most of them refused to turn out, much to Bowdoin’s astonishment.

Bowdoin forced the Massachusetts legislature to “vindicate [this] insulted dignity of government” and passed the Riot Act (with the help of Samuel Adams) which “forbade all gatherings of more than 12 armed persons and empowered sheriffs to kill rioters.” Adams went so far as to say: “Rebellion against a king may be pardoned, or lightly punished, but the man who dares to rebel against the laws of a republic ought to suffer death.” The legislature passed additional laws prohibiting the exercise of the freedom of speech that was critical of the government, and suspending habeas corpus for the protestors.

Finally, after the rebellion had been put down, the legislature added the final insult by passing the Disqualification Act, which stated in part:

That to whomsoever of the offenders aforesaid, the Governor shall think fit, by virtue of any act or resolve of the General Court, to promise a pardon and indemnity, for the offences aforesaid, it shall be under the following restrictions, conditions and disqualifications, that is to say, That they shall keep the peace for the term of three years, from the time of passing this act, and that during that term of time, they shall not serve as Jurors, be eligible to any Town-Office, or any other Office under the Government of this Commonwealth, and shall be disqualified from holding or exercising the employments of School-Masters, Innkeepers or Retailers of spirituous liquors, or either of them, or giving their votes for the same term of time, for any officer, civil or military, within this Commonwealth… (emphasis added)

There were two other tax rebellions in America’s early history, the Whiskey Rebellion from 1791 to 1794, and Fries’s Rebellion from 1799 to 1800, each with the same result: tax protestors were met with overwhelming government force, with numerous casualties recorded.

Each had the lasting impact of cementing into place the government’s right to suppress violent resistance to its laws.

As Mitchell dourly commented, if carrots are outlawed in Marce’s theater, he could always sell tomatoes.

European Union Fraud Freedom Liberty Taxes Unemployment VAT
This entry was posted on Monday, November 19th, 2012 at 7:24 pm and is filed under Economics, History. You can follow any responses to this entry through the RSS 2.0 feed. Both comments and pings are currently closed.
Many of the articles on Light from the Right first appeared on either The New American or the McAlvany Intelligence Advisor.