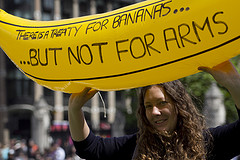 Pastor Chuck Baldwin is long past being polite and pulling his punches. In his latest newsletter he reminds us that people are beginning to become restless. The petitions on secession are mounting in numbers daily, and he thinks that’s a good thing. Not that they will have any impact whatsoever:

Does anyone believe that these states are really going to secede from the union? Of course not. At least, not yet. Citizen petitions are just that. In order for a State to secede it would have to be formally declared by an act of the State’s legislature and governor. Good luck finding many of those.

But they do represent a stirring of discontent which could be the beginning of something much bigger and more ominous. Baldwin thinks that Obama is going to be successful in ramming the UN small arms treaty through the Senate, which is the next step to enforced confiscation. He sees it coming, house to house:

Most everyone is predicting that Obama will coerce the US Senate (yes, enough Republicans will go along with the Democrats) into signing the UN Small Arms Treaty. Many say that this treaty could pave the way for outlawing personal firearms–maybe even the attempted confiscation of personal firearms. Not surprisingly, the sale of guns and ammo has gone through the roof since Election Day.

At this juncture, I simply must make this studied prediction: treaty or no treaty, UN or no UN, law or no law, there are millions of able-bodied Americans all over the fruited plain who are not going to surrender their firearms to anybody. They just flat aren’t going to do it! If the federal government truly wants to legitimize and explode what is now merely citizen petitions for secession into full-fledged, honest-to-God, bring-it-on, declarations of independence by numerous State legislatures analogous to 1776, let them attempt to outlaw and confiscate people’s firearms. With no disrespect to my friends north of the border and overseas, this is not Canada or Australia. This is America, and we will never surrender our guns! Period!

He thinks most of those citizens have already made up their minds as to what they will do when they hear the knock on the door at night (the confiscators dare not do it during daylight hours). And for those who are still undecided:

It’s time RIGHT NOW to make up your mind and decide how much freedom is worth to you, because the only thing separating you and me from slavery is “the people’s liberty-teeth” (George Washington’s characterization of guns). You can’t make up your mind when federal troops are standing on your doorstep. You’ve got to make up your mind NOW. And I’m saying that there are tens of millions of Americans whose minds are already made up on this matter.

I always review my comments before sending them on to my website. In reviewing these I’m certain that some will think Baldwin – and I – are “extreme” in our views as to what we see coming. If we’re wrong, then you may expect an apology here. If we’re early, then that’s a good thing. But if history proves us correct, then we’re not so extreme after all. Remember that Hitler was voted into power in 1933 and he didn’t begin to enforce house-to-house gun confiscation until 1938.

Baldwin says that the increasing interest in the petitions is the one good thing Obama’s reelection has done:

These citizen petitions demonstrate that people are truly beginning to wake up. Mitt Romney would have put them to sleep; Barack Obama has awakened them. That’s the one good thing the reelection of Barack Obama has accomplished!

2012 Elections Chuck Baldwin Federal Government Freedom Gun Control Liberty Mitt Romney Obama Second Amendment Senate Treaty UNATT
This entry was posted on Sunday, November 18th, 2012 at 9:55 am and is filed under Constitution. You can follow any responses to this entry through the RSS 2.0 feed. Both comments and pings are currently closed.
Many of the articles on Light from the Right first appeared on either The New American or the McAlvany Intelligence Advisor.