The War on Drugs is Ending 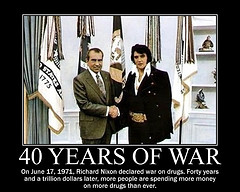 And none too soon, either. The War on Drugs has been an epic failure, costing taxpayers billions of dollars and huge invasions of privacy. A Harvard professor has estimated that the war costs US taxpayers $100 billion a year. And The New York Times has tallied up the rest of the cost. It concludes that “the struggle on which [the government has] spent billions of dollars and lost tens of thousands of lives over the last four decades has failed.

Doug Bandow from the Cato Institute is joyful over the victories in Colorado and Washington:

The most important vote on November 6 was not reelecting Barack Obama as president. It was legalizing marijuana in Colorado and Washington. Drug prohibition is the latest addition to the endangered species list. The fight over drug policy will go on for a long-time. But the Drug War is ending.

Surprisingly the battle against the war has been going on for forty years!

Opposition to the Drug War has been steadily rising. The first mini-wave began with Oregon in 1972 and resulted in a dozen states decriminalizing marijuana use. Over the years the process continued to slowly advance; in June Rhode Island joined the club. The measures varied, but in general turned personal use of pot into a criminal misdemeanor or a civil offense and/or made marijuana prosecution a low priority.

The fight has been gaining significant momentum. One could almost call it a tidal wave, a virtual paradigm shift in thinking, in favor of freedom:

Last week voters in Massachusetts and Montana approved medical marijuana initiatives while one in Arkansas barely failed, winning 49 percent of the vote.

What’s especially delightful is that Washington is powerless to do anything about it:

Two years ago the Obama Justice Department said it would “vigorously” enforce drug prohibition if Californians voted to legalize recreational pot use. Attorney General Eric Holder’s minions likely will do the same in Colorado and Washington, though so far the Justice Department only said that it was “reviewing” the issue. The day after the vote the Drug Enforcement Agency announced that federal law “remains unchanged.”

I expect nothing but silence from the federal enforcers. After all, people will do what they want to do:

Marijuana smoking is unhealthy. So is cigarette smoking. And alcohol use. And eating sugar. People who ride motorcycles, climb mountains, and hang glide sometimes die. Every day life involves varying risks and trade-offs. Such judgments are best left with individuals and families, not the government, whether federal or state.

We’re in the final throes of slaying this beast. It gives me great encouragement to see that if we can turn back this monstrosity, what else can people in the freedom movement do?

Cato Institute Colorado Eric Holder Freedom Nullification Obama Privacy War War on Drugs
This entry was posted on Saturday, November 17th, 2012 at 7:04 pm and is filed under Constitution. You can follow any responses to this entry through the RSS 2.0 feed. Both comments and pings are currently closed.
Many of the articles on Light from the Right first appeared on either The New American or the McAlvany Intelligence Advisor.