The Impact of the Technology Explosion 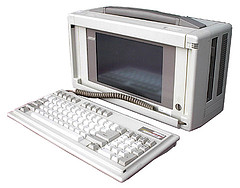 Mark Perry brings it, again. He compares the costs (in dollars and, more importantly, in hours of labor) of buying computer technology in 1984 and that same technology today. It’s astonishing what he has discovered:

Measured in time worked, the average American in 2012 would only have to work about 27 hours (about 3.5 days) at the average wage today of $19.79 to purchase [an] HP laptop and [a] SanDisk flash drive, compared to the five months of work in 1984 to purchase the “cutting edge” portable computer and external disk drive of that era.

Today’s laptop is 6 times lighter and 62,500 times faster than the 1984 portable computer, while today’s flash drives store thousands of times more data than the external drives in 1984.

Perry says that we’re not surprised because the improvement didn’t happen overnight, it happened over the last 29 years, so we become immune to it, and even expect it. Why not? Why not wait until the iPhone 5 comes out? It’ll be a quantum jump ahead of the iPhone 4. We expect it.

And there’s the impact on our standard of living:

A comparison of today’s computer prices to 1984 also helps us appreciate how technological improvements elevate the standard of living of average and low-income American to levels that previous generations and wealthy households couldn’t have even imagined.  The computers of the 1980s were expensive and generally only available to the upper-income groups, whereas today’s computers are now accessible by even low-income households.

Even the Great Depression didn’t slow technological progress, and that’s been the case through all of our economic downturns including the most recent one.  There’s an “inevitable, inexorable and incremental march of technological improvement” that continues steadily even during recessions and depressions.

What an amazing time to be alive!

Capitalism Free Market Great Depression Technology
This entry was posted on Saturday, November 17th, 2012 at 11:35 am and is filed under Economics. You can follow any responses to this entry through the RSS 2.0 feed. Both comments and pings are currently closed.
Many of the articles on Light from the Right first appeared on either The New American or the McAlvany Intelligence Advisor.