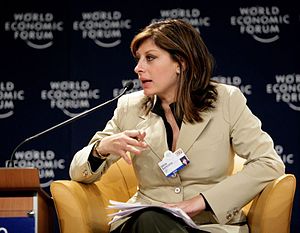 Maria Bartiromo is the majorette domo of television investment broadcasting. She is also a Keynesian. From her bio:

Bartiromo graduated from New York University, where she studied journalism and economics.

Rest assured good friends that NYU doesn’t teach Austrian School economics. And membership in the CFR guarantees that anything she says or writes will be the elite Anglo-American establishment’s view.

And she is getting nervous about the fiscal cliff:

The ongoing fight over the “fiscal cliff” may overshadow everything else as we get closer to the new year. Sadly, compromise seems hard to come by, even though the consequences of going over the cliff — hundreds of billions of dollars of spending programs that are set to expire, along with the largest tax increase since World War II for virtually all income levels — was specifically designed to force compromise.

Obama has dug in his heels: no deal unless more taxes are levied on the rich. This is in line with his Marxist ideology: “A heavy progressive or graduated income tax”  This progressive income tax came about a hundred years ago so it’s not fair to suggest that this is new to Obama. He just wants to extend it and make it more painful in his quest to change the capitalist system into a state-controlled one.

And so the market is nervous:

So the market has been nervous over the unknowns of where tax rates will be in 2013, and has sold off since Election Day in anticipation of much higher capital gains and dividend taxes.

Republican Speaker John Boehner has said he is open to more tax revenue, but not via higher tax rates.

And then, buried in her article, comes the message to Obama from the establishment: “Give it up, big fella. You’re not going to get higher taxes on the wealthy. There are too many people in the House who have signed the Pledge.” Here’s what she wrote:

The president has campaigned on raising tax rates on the highest earners, which includes small business owners, and he is sticking to it. He has dug in his heels. This is disappointing because, as the stock market is telling us, it makes a deal less likely. What’s truly alarming is we are stuck on this petty “tax the rich more” fight, even though we know that revenue would not be enough to make a dent in our massive debt and deficit.

Maria’s message: “So, give it up, Mr. President. Not this time. Sorry ’bout that. Back off. Make a deal with Boehner.”

Thanks, Maria, for letting us know how the establishment views the fiscal cliff and the president’s intransigence.

Austrian School Council on Foreign Relations Deficit Elite Establishment Fiscal Cliff Income Tax John Boehner Keynesian Marxism Obama Republican Small Business Spending Stock Market Taxes Taxmageddon Wall Street War
This entry was posted on Saturday, November 17th, 2012 at 7:07 am and is filed under Economics, Politics. You can follow any responses to this entry through the RSS 2.0 feed. Both comments and pings are currently closed.
Many of the articles on Light from the Right first appeared on either The New American or the McAlvany Intelligence Advisor.