Grover Norquist Weighs In on the Fiscal Cliff 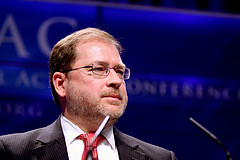 This is the guy who started it all, years ago. In 1985 Grover Norquist founded Americans for Tax Reform whose goal is “a system in which taxes are simpler, flatter, more visible, and lower than they are today. The government’s power to control one’s life derives from its power to tax. We believe that power should be minimized.” He’s also known for his famous quip: “I’m not in favor of abolishing the government. I just want to shrink it down to the size where we can drown it in the bathtub.”

His Taxpayer Protection Pledge has been signed by a vast majority in the House and many in the Senate, and those signers are taking their pledge seriously. It’s a major roadblock to Obama’s plan to increase taxes:

Republicans were re-elected to remain the majority in the House of  Representatives and they point out that voters watched them stop Obama’s drive  for higher taxes for the past two years. Clearly their victory in the House is  America speaking out against higher taxes.

And the people? On Election Day exit polls, when asked about supporting tax  hikes to reduce the deficit, 63 percent of Americans said they were opposed.

And the election has changed nothing:

Two years ago, we faced a “fiscal cliff” because the Bush tax cuts of 2001 and 2003 and various other tax cuts were all scheduled to end on January 1, 2011. At the time, Obama was president, there was a Democrat-controlled Senate and the GOP had just won the House. The compromise was to extend all Bush tax cuts two years. Obama said it would be a mistake to raise taxes during a lousy economy.

Two years later, we have all the same players around a chessboard with the pieces arrayed exactly the same: Democratic White House and Senate, and GOP House. One likely possibility is that the status quo is extended for two years to refight after the 2014 elections—exactly what happened in 2010. An alternative is that Congress and the White House may extend lower tax rates for six months to continue negotiations.

The real issue is Obama and his reluctance to back away from his demand for higher taxes on “the rich.” But that remains a very bad idea:

Some had hoped that President Obama would focus on job creation and back off his high tax/stimulus spending agenda that has so damaged the economy. It does appear that four years of failure have taught him nothing.

Obama has not put on the table any specific entitlement reforms and is demanding a total of $1.6 trillion in tax hikes. He is all tax hikes and no spending restraint. Nothing has changed in four years.

It’ll be interesting to see if the signers of his Pledge have the backbone to keep it.

Americans for Tax Reform Bush Tax Cuts Democrat Grover Norquist Obama Republican Senate Spending Taxes Taxpayer Protection Pledge
This entry was posted on Saturday, November 17th, 2012 at 3:54 pm and is filed under Economics, Politics. You can follow any responses to this entry through the RSS 2.0 feed. Both comments and pings are currently closed.
Many of the articles on Light from the Right first appeared on either The New American or the McAlvany Intelligence Advisor.