The Changing Demographics of Election 2012 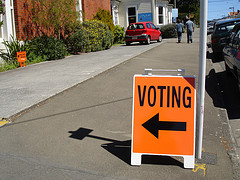 On Sunday before Election Day, the Pew Research Center released its final prediction on the outcome of the election: President Obama would win, beating Republican Party candidate Mitt Romney, 50% to 47%. When all votes were tallied, Obama beat Romney, 50.6% to 47.8%.

Pew acknowledged that the president’s virtual takeover of the media in the aftermath of Hurricane Sandy just before the election persuaded some who were undecided to vote for the president. According to Pew:

Obama’s handling of the storm’s aftermath may have contributed to his improved showing. Fully 69% of all likely voters approve of the way Obama is handling the storm’s impact.

Even a plurality of Romney supporters (46%) approve of Obama’s handling of the situation; more important, so too do 63% of swing voters.

In its final pre-election survey of 2,709 voters conducted from October 31 through November 3, Pew began to see how the electorate was moving. 39% of likely voters supported Obama strongly whereas just a third of them strongly supported Romney. Noted Pew: “In past elections…the candidate with the higher percentage of strong support has usually gone on to win the popular vote.”

Among women voters, Pew noted the most dramatic shift towards Obama, favoring him 53% to just 40% for Romney – a 13 point margin and a 6 point gain from just a week before.

Meanwhile, Pew noted that among voters age 65 and older, Romney’s support began to fade down the home stretch. Romney’s 19-point lead in Pew’s previous poll had declined to just 9 points in the latest one.

On Wednesday, November 7, Pew released its post-election analysis and noted that its prediction was spot-on, with women, young people, and minorities breaking strongly for Obama, overcoming the advantage Romney held among older white voters. Here’s how Pew described the shift:

While minority compositional gains were not huge, they offset a strong tilt against Obama among white voters. Nationally, Romney won the white vote, 59% to 39%.

Although Obama nominally lost the independent vote, 50% to 45%, the number of Democrats (making up 38% of all voters) overwhelmed the Republicans (who made up just 32% of all voters). Pew calls it a “demographical transformation”:

Evidence of the demographic transformation of the electorate is seen in the profiles of each candidate’s supporters: Fully 89% of Romney’s were white non-Hispanics, compared with just 56% of Obama’s supporters. Romney managed to better McCain’s showing among whites by four percentage points – and still lost the election.

The message from the Obama campaign that most of the causes of the Great Recession could be laid at the feet of President George Bush still continued to resonate with voters, with voters blaming him and not the president for the recession by 53% to 38%. And although many forecasters considered the poor economy as a liability for the president’s reelection chances, those who stated that their financial situations hadn’t changed under Obama’s first term still voted for him by a wide margin: 58% to 40%.

Laurie Goodstein, writing in The New York Times, noted another demographic that worked in Obama’s favor: the failure of the so-called “Christian Right” to overcome the demographical shift even with a highly energetic campaign in favor of Romney. In an interview, R. Albert Mohler, president of the Southern Baptist Theological Seminary, said:

It’s not that our message — we think abortion is wrong, we think same-sex marriage is wrong — didn’t get out. It did get out.

It’s that the entire moral landscape has changed. An increasingly secularized America understands our positions, and has rejected them.

Such a strong showing by Obama in the election signifies a shift that cannot be denied, according to Robert P. Jones, head of left-of-center Public Religion Research Institute, who said

This election signaled the last [one] where a white Christian strategy is workable. Barack Obama’s coalition was less than 4 in 10 white Christian. He made up for that with not only overwhelming support from the African-American and Latino community, but also with the support of the religiously unaffiliated.

Future elections will no doubt increasingly be decided by women, young people and minorities, as the greying, over-age-65 voters, diminish in numbers and influence and the secularization of our society continues.

2012 Elections Abortion Christian Democrat Economy George W. Bush Great Recession Mitt Romney Obama Pew Research Center Polls Recession Religion Republican
This entry was posted on Friday, November 16th, 2012 at 11:23 am and is filed under Politics, Religion. You can follow any responses to this entry through the RSS 2.0 feed. Both comments and pings are currently closed.
Many of the articles on Light from the Right first appeared on either The New American or the McAlvany Intelligence Advisor.