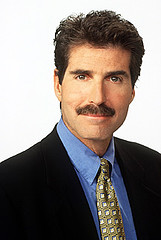 John Stossel is about as pessimistic as I’ve seen him. Freedom lost last Tuesday. Totalitarianism got stronger:

Some people with records of supporting liberty were elected: Sen. Jeff Flake in Arizona and U.S. Reps. Justin Amash and Kerry Bentivolio in Michigan and Thomas Massie in Kentucky…

Also, Washington and Colorado voted to allow any adult to use marijuana…

But overall, the results were bad for freedom.

He says we should “fix” government the way we “fix” our cats and dogs: spay them, neuter them.

How does he propose to do that? Term limits! That’ll work, you bet:

Term limits would be good. When we give politicians power, they should know they don’t get to keep it forever. They have to bring that power right back to us and drop it at our feet. “Good boy. Now go back outside!”

Stossel thinks that, for the moment, gridlock will delay or slow down the mad race to total government:

My hope for now: gridlock. People say they like bipartisanship, but bipartisanship usually means politicians conspire to take more of our money and freedom. Bipartisanship gave us the Department of Homeland Security, TSA, PATRIOT Act, Import-Export Bank, war on drug users, ethanol subsides, TARP, No Child Left Behind, foreign wars and an ever-rising debt. When Democrats and Republicans come together, they put us deeper in debt.

Let’s have some gridlock!

Notice please that this is precisely what the founders intended: to slow down the race to total government, to put up obstacles, to set up conflicts, to disperse powers among competitors. They had remarkable foresight. They also had read their history.

What’s needed is an understanding that the essence of freedom is the limitation of government. Stossel makes it clear that, by and large, at least among the Obama supporters he talked with, they are clueless about freedom:

We attended Obama’s victory party in Chicago (we go so you don’t have to) and asked his supporters what Obama’s reelection means for freedom. People reacted as if they didn’t understand the question.

It’s not on their radar, and that’s upsetting. Some wouldn’t know freedom if they fell over it. To many, “freedom” means getting the government to force women’s employers to pay for birth control.

And that’s our task: education first, action afterwards. It’s a big task, but we are getting lots of help. Here’s Benjamin Franklin on the primary source:

I have lived sir, a long time, and the longer I live, the more convincing proofs I see of this truth, that God governs in the affairs of men. And, if a sparrow cannot fall to the ground without his notice is it probable that an empire can rise without his aid?

Accordingly, I think it’s just a tad early to be giving up the fight.

2012 Elections Colorado Democrat Department of Homeland Security Education EPA Ethanol Freedom Gridlock John Stossel Liberty No Child Left Behind Obama Patriot Act Republican War
This entry was posted on Friday, November 16th, 2012 at 3:43 pm and is filed under Constitution, Politics. You can follow any responses to this entry through the RSS 2.0 feed. Both comments and pings are currently closed.
Many of the articles on Light from the Right first appeared on either The New American or the McAlvany Intelligence Advisor.