Guerrillas in the Freedom Fight 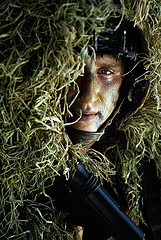 Kurt Schlichter is a free-lance writer whose articles have been published in many national publications, liberal and conservative. Here he gives conservatives a much-needed boost:

Right now, there is one strategy that offers us hope of turning the leftward tide. Insurgency…

First, we need some perspective on the freedom fight:

The first thing we need to do is get out of our head the notion that this fight will be over if we just pull off a victory in 2014 or 2016.

This is not just a single political battle but a political and cultural campaign. America did not go from a nation of stalwart, self-reliant achievers to a country full of couch-dwelling moochers in just four years, and we won’t change it back in the next election, or the one after that, or even the one after that.

Our role models, the patriots of 1776, didn’t drive the redcoats out until 1783.  Our strategic end is long-term – an America where free market values prevail, where all of our liberties are respected, and where a limited government spends within its means and only within the bounds set forth in the Constitution.

He treats the freedom fight as a war, and rightly so. Some of Sun Tzu’s tactics are useful here:

Initially, we should work to avoid a decisive battle…

And a big one is shaping up that we’re unlikely to win: the Fiscal Cliff:

We can already see where they are shaping the battlefield to defeat us: the Fiscal Cliff fight. Clearly, Obama will seek to maneuver us into an unpopular position and finish us off. You can almost hear the mainstream media’s cries of “Obstructionist Tea Party/GOP House!” We are nearly guaranteed to lose with this correlation of forces. We need to avoid the ambush.

That may require cutting our losses to retire from the battlefield – a winning guerilla movement spends most of its time retreating. We may not be able to stop them from letting taxes rise on those horrible, horrible wealthy folks, but there’s no reason we should help them. Let the Democrats buy the tax hikes. Let the affluent gentry that supported him see how they like them.

Then Schlichter gets to the most effective point of attack: local politics:

Guerillas take advantage of safe havens… We own a lot of statehouses and governorships, and we can grow out there in the states quietly, unobserved, building strength and putting conservative policies in place… building a track record of conservative successes in the states – especially as blue strongholds like California and Illinois spiral down the drain – creates powerful evidence of our potential at the national level.

The states also, critically, allow us to start building a farm team of candidates for federal offices up to and including the presidency. At age four, the Tea Party revolt is not yet a fully matured movement. We still pick candidates on the basis of pure ideology and fail to understand the importance of presentation. It’s not that we don’t have people of astonishing accomplishment to choose from – Ted Cruz comes to mind…

As Andrew Breitbart observed, politics is downstream from culture. We can luck out and grab the presidency, but if society does not share conservative values we will simply end up with another disastrous Bush administration. That means we need to do what guerillas do and infiltrate into the enemy’s turf, slipping conservatives into the mainstream media, academia, and the entertainment world…

It’s time conservatives thought strategically, and for now that means we must become political and cultural guerillas.

This is where the battle is won, on the local level. We can take a page out of the Democrats’ playbook and integrate ourselves into local politics where the odds are much more favorable, and our voices can be more clearly heard.

Andrew Breitbart Conservative Democrat Fiscal Cliff Free Market Freedom Liberal Obama Taxes Taxmageddon Tea Party Ted Cruz
This entry was posted on Friday, November 16th, 2012 at 5:51 pm and is filed under Politics. You can follow any responses to this entry through the RSS 2.0 feed. Both comments and pings are currently closed.
Many of the articles on Light from the Right first appeared on either The New American or the McAlvany Intelligence Advisor.