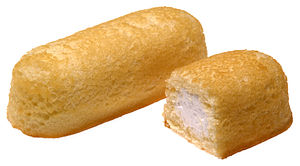 How sad this is, and how predictable. Unions have successfully bankrupted another company in its efforts to “protect” its workers. In order to save jobs, the union has forced Hostess to terminate 18,000 of them. What a crazy world we live in!

We deeply regret the necessity of today’s decision, but we do not have the financial resources to weather an extended nationwide strike.  Hostess Brands will move promptly to lay off most of its 18,500-member workforce and focus on selling its assets to the highest bidders…

Many people have worked incredibly hard to keep this from happening, but now Hostess Brands has no other alternative than to begin the process of winding down and preparing for the sale of our iconic brands.

It’s not our fault, says the union:

“Our members are on strike because they have had enough,” bakers’ union president  Frank Hurt said in a statement Tuesday. “They are not willing to take draconian wage and benefit cuts on top of the significant concessions they made in 2004  and give up their pension so that the Wall Street vulture capitalists in control of this company can walk away with millions of dollars.”

The company says it simply cannot afford the increasing pension costs that the unions have demanded. USA Today said:

Privately held Hostess filed for Chapter 11 protection in January, its second trip through bankruptcy court in less than a decade. The company cited increasing pension and medical costs for employees as one of the drivers behind its latest filing.

Members of the union were delighted to hear about Rayburn’s decision:

Do it, shut it down,” a woman yelled at 5 p.m. Thursday from the picket line formed at the company’s Indianapolisplant. As many as 45 people in the picket line chanted, “No pension, no deal,” as they walked a tight circle in the growing cold and gathering darkness.Their picketing drew frequent supportive honks from passing drivers.Wedrick Hollingsworth, business agent for Local 372-B of the bakers union, said union members took wage and benefit concessions four years ago and are unwilling to accept further wage cuts and reductions in health and pension benefits sought by the company. “It’s just too much for these employees to accept. We gave concessions four years ago.”John Smith, a wrapper operator at the plant who has worked for Hostess for 22 years, said he’s at peace with his decision to join the strikers. “You have to take a stand for what you believe in. They gave us a take-it-or-leave-it deal. We can’t take the financial abuse.”

So they’re not taking it, and leaving.

Bankruptcy Pension Unions Wall Street
This entry was posted on Friday, November 16th, 2012 at 9:05 am and is filed under Economics. You can follow any responses to this entry through the RSS 2.0 feed. Both comments and pings are currently closed.
Many of the articles on Light from the Right first appeared on either The New American or the McAlvany Intelligence Advisor.