Voter Fraud for Obama? You Bet! 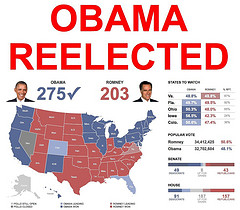 The real question isn’t “whether” there was voter fraud, but instead “how much” was there? Joseph Farah, writing on his WorldNewsDaily blog, says there was a lot. And he knows: he’s been on both sides:

I understand Barack Obama and Bill Ayers because I was one of them early in my life. I even met Ayers and Bernardine Dohrn and Tom Hayden and Jane Fonda in the old days. I admired them. If Obama had been old enough during the 1960s and 1970s, I probably would have run into him, too…

I know the arguments of the other side and can still spout them before most of today’s practitioners of so-called “progressive” thought can.

He knows that morality is relative for these thugs: whatever gets the job done is OK, no matter who’s hurt or what’s damaged. It’s simple: the ends justify the means. Pragmatism. Practical politics. It’s all the same:

What it means, in short, is that the ends justify the means. It means violence is fine in achieving a worthwhile objective. It means lying, stealing, cheating and all those other bourgeoisie “sins” are appropriate means of furthering the cause.

In fact, it’s a “moral imperative:”

Stealing the vote is not only an acceptable practice by these people, it is a moral imperative in their twisted worldview.

Am I suggesting that the recent presidential election was stolen through voter fraud and manipulation?

He has the evidence:

I am convinced that at least 5 percent of the Democratic vote can be attributed to fraud – illegal voters, illegal campaign contributions, rigged balloting, intimidation at the polls, you name it.

Here’s just some of the evidence for the skeptical:

Did the voter fraud tip the election in Obama’s favor? I don’t think so. There’s far more going on in the country that accounts for the leftward drift. This was just insurance.

2012 Elections Democrat Eric Holder Fraud Obama Polls Republican
This entry was posted on Wednesday, November 14th, 2012 at 8:57 am and is filed under Politics. You can follow any responses to this entry through the RSS 2.0 feed. Both comments and pings are currently closed.
Many of the articles on Light from the Right first appeared on either The New American or the McAlvany Intelligence Advisor.