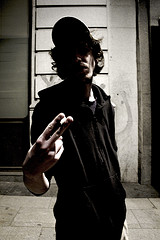 Although this article is more about “marijuana tourism” in Colorado and Washington, it gives me a chance to highlight the much more important issue in the freedom fight: state nullification of unconstitutional federal interference.

Kristen Wyatt, the AP writer, mentions it only in passing, wanting instead to explore the tourism issue:

She’s right. This amendment to Colorado’s constitution does set up “an epic state-federal showdown” and I welcome it. In my opinion, (and not just mine, as you’ll see) the feds are going to end up on the losing side. The only way they can avoid losing is to acquiesce, which opens the door wider for

other states to implement the same strategy on other unconstitutional federal mandates. Either way: confrontation or acquiescence, they lose, we win, freedom wins. I love it.

Here’s what my good friend Jeff Wright had to say about Amendment 64 and its breath-taking (sorry) implications:

The approval, by the voters on November 6th, of Colorado’s initiated Amendment 64 is a bellwether in the modern movement to end Marijuana Prohibition…

Being a State Constitutional Amendment, Amendment 64 carries a higher precedent than an Initiated Statute such as Washington’s 502; it is a change in fundamental and not just positive law.  It is We The People speaking directly through their Constitution to the state legislature and to the subservient federal government:  “You will do as we direct you to do!”

The plenary power to legislate by the We The People is retained under the Colorado Constitution’s Article V, Section 1, clauses (1) and (2). It seems to be forgotten too often in this country today that the We The People are indeed the sovereign.

I’m sorry, but I simply cannot resist this: Amendment 64 is a breath of fresh air for those of us involved in the freedom fight. Thank you, Colorado! And thank you, Jeff, for so cogently explaining its importance! Breathe deeply. That smell is the smell of freedom.

Colorado Constitutional Federal Government Freedom Nullification State Government War on Drugs
This entry was posted on Wednesday, November 14th, 2012 at 8:31 am and is filed under Constitution. You can follow any responses to this entry through the RSS 2.0 feed. You can leave a response, or trackback from your own site.
Many of the articles on Light from the Right first appeared on either The New American or the McAlvany Intelligence Advisor.