Generators, Craigslist and the free market 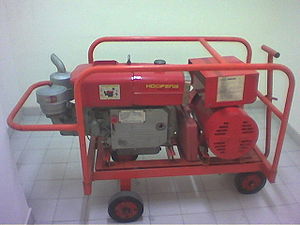 Economist Mark Perry is having a field day showing how people are using Craigslist to do an end run around New Jersey regulations against “price gouging.” His first post on the matter appeared on Sunday, November 4th, when he noted that people were buying generators from Home Depot, Sears and Lowe’s, paying retail prices of $700-$800 each, and then putting them up for sale on Craigslist at $1,000 or more. As he gleefully reported:

So apparently  entrepreneurs and speculators are buying up all of the portable generators at Home Depot, Sears and Lowe’s at  artificially low prices and re-selling them at prices that many consider to be  what the market will bear, or market prices.

Of course, this ticks off the statists and anti-capitalists and the ignoranti who think such behavior is outrageous. As one ad on Craigslist exclaimed:

The listings for generators [here on Craigslist] are from people looking to take your money! The generators were purchased at Lowe’s, Home Depot, Sears, etc. They only cost $799!! These people stood in lines to buy generators only to take your money and make a profit. In return many people are without a generator – many little children don’t have electricity in their homes because their parents can’t afford to pay twice the price of a generator from price gouging!

As Perry notes, if the free market were allowed to operate in New Jersey, and Lowe’s and Sears and Home Depot were allowed to charge what the market would bear, there would be generators for all, at prices reflecting supply and demand. But no, they fear state retribution. So people do an end run around those threats by using Craigslist.

But now that the crisis is (mostly) over, guess what is happening to the prices of generators? A search for “generator” on North Jersey‘s Craigslist: http://newjersey.craigslist.org/search/hsa?sort=date&query=generator&srchType=A reveals see prices already coming down!

Supply and demand is a wonderful thing.

Do you think these New Jersey bureaucrats will now charge these individuals with “dumping?”

Free Market Price Gouging Regulations
This entry was posted on Wednesday, November 14th, 2012 at 3:28 pm and is filed under Economics. You can follow any responses to this entry through the RSS 2.0 feed. Both comments and pings are currently closed.
Many of the articles on Light from the Right first appeared on either The New American or the McAlvany Intelligence Advisor.