Mayor “How Do You Spell ‘Loony’?” Bloomberg 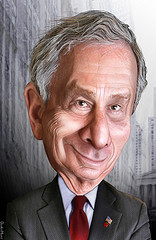 This is nearly incomprehensible to me. New York City Mayor Michael Bloomberg is, according to Wikipedia, the 10th richest man in the country. According to me, he’s close to being the maddest. He is banning food contributions to the homeless in his never-ending quest to be the city’s food-nanny:

Richter has been collecting food from places like the Ohav Zedek synagogue and bringing it to homeless shelters for more than 20 years, but recently his donation, including a “cholent” or carrot stew, was turned away because the Bloomberg administration wants to monitor the salt, fat and fiber eaten by the homeless.

I’m speechless at the man’s audacity and hubris. (Since I’m writing this, am I “wordless?”) Apparently, so is Bloomberg. When asked about how he could defend such a preposterous mandate, he mumbled incoherently:

For the things that we run because of all sorts of safety reasons, we just have a policy it is my understanding of not taking donations.

I beg your pardon? Is this the mayor speaking? The mayor of New York?

Lunatic is an informal term referring to people who are considered mentally ill, dangerous, foolish or unpredictable; conditions once called lunacy. The term may be considered insulting in serious contexts, though is sometimes used in friendly jest. The word derives from lunaticus meaning “of the moon” or “moonstruck”.

This was just too much for Donald Boudreaux, either, so he wrote a letter to CBS 2, suggesting that they sponsor a spoof about this guy:

Imagine Saturday Night Live spoofing Mayor Michael Bloomberg’s fanatical passion to restrict New Yorkers’ diets to foods that Mr. Bloomberg divines to be appropriate.  A hilarious skit would feature a Mayor Mike lookalike standing in a homeless shelter and ordering heavily armed policemen to turn away private citizens who come to donate food.  The “Mayor” would calmly explain to hungry residents of the shelter that the City hasn’t the resources to inspect donated foods to ensure that the fat, salt, and fiber contents of these foods meet the Mayor’s exacting standards.  So no donating food to hungry New Yorkers!

The audience laughter would be uproarious.

Bloomberg is a self-confessed “salt-aholic” according to the story. Excessive salt in his food has started to rot his brain.

Donald Boudreaux Michael Bloomberg
This entry was posted on Monday, November 12th, 2012 at 9:40 am and is filed under Constitution, Politics. You can follow any responses to this entry through the RSS 2.0 feed. Both comments and pings are currently closed.
Many of the articles on Light from the Right first appeared on either The New American or the McAlvany Intelligence Advisor.