What Liberties are We Actually Losing? 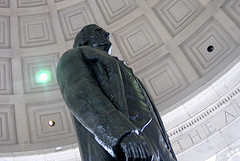 Russ Roberts received an interesting email that asks some important questions about the freedom fight:

You guys have been forecasting the arrival of universal serfdom for about as long as the left has been predicting the collapse of capitalism. Is the Road to Serfdom gridlocked? Did someone forget to gas the car? Has our dashboard GPS unit failed? Or our we just moving really slowly, the better to take in the scenery?

I mean, come on. I’m guessing that you, the readers of this blog are among the freest people in human history. You are free to go pretty much anywhere in the world you wish to go, free to buy pretty much anything that’s available for sale anywhere, free to think anything you want, say anything you want, read anything you want, watch anything you want on TV. And even after you’ve paid for all those dinners in nice restaurants, vacations in nice places, and homes in nice subdivisions, you still have enough left over to own shares of Apple or Google. You’re paying less in taxes than you have in decades. If you get really sick, or suffer a serious injury, you will receive top quality medical care than will not leave you penniless even though you might never be able to pay the full cost of your care yourself– thanks largely to the pre-eminently socialist institution known as “insurance.” And even if you’ve not made or saved lot of money in your lifetime, you will not be destitute in your old age, and you will not be allowed to die like a dog in the street. And so on.

Maybe I’ve missed something. But an itemized list of liberties of which you have been deprived, or that you are at risk of losing, might help me get up to speed.

Roberts fumbles around with his answer:

He’s really asking what’s the big deal with the last four years or the four years to come. Is it really so bad? Why are those of us who claim to love liberty so concerned about the path of the country? Most of us have a good life here and that is another reason to be pretty cheerful. Things really are pretty good in the United States. They were good before Obama got elected and they’ll likely be good even after his next four years. So why are we so alarmed and anxious?

What about the general quality of life? It is pretty good and has been for some time. And it keeps getting better. Most of the time, anyway. So why are those of us who love liberty so upset with the state of the country? Shouldn’t we just chill out and enjoy the ride? What’s so bad about big government?

Those of us who are committed, even at the cost of our lives, to the freedom fight, need to have some pretty good answers to these questions. Roberts doesn’t seem to have any:

I worry it won’t be so good for my children. We’re becoming more like Europe. I don’t know if you’ve looked lately but Europe isn’t doing very well. The last time I looked, unemployment in Spain was 25%. Most Europeans still have a good life, but I don’t like the trajectory and I’d hate to look for work as a teenager. It’s not a very dynamic place. Yes you can read what you want and eat good food in good restaurants if you have a job. And because of the generosity of the welfare state, you can even enjoy those freedoms without a job. But I’m not sure it’s going to last very long.

These aren’t enough for me to go to the wall over. I have other reasons – much more important and pressing reasons that I’m in the fight – and I’m wondering what yours are?

2012 Elections Capitalism Freedom Gridlock Hate Insurance Liberty Obama Socialism Spain Taxes Unemployment
This entry was posted on Sunday, November 11th, 2012 at 1:13 pm and is filed under Constitution, Economics, Politics. You can follow any responses to this entry through the RSS 2.0 feed. Both comments and pings are currently closed.
Many of the articles on Light from the Right first appeared on either The New American or the McAlvany Intelligence Advisor.