Marching Towards the Fiscal Cliff 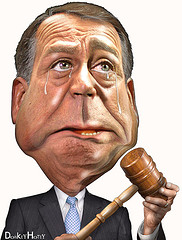 This article from the Washington Times perfectly illustrates how Washington is going to deal with the “fiscal cliff,” which means that nothing much will happen to bend the trajectory away from inevitable bankruptcy.

First, the inevitable warnings from the Congressional Budget Office (CBO) which focuses only on the immediate:

Even if all of the fiscal tightening was eliminated, the economy would remain below its potential and the unemployment rate would remain higher than usual for some time.

If the fiscal tightening was removed, and the policies that are currently in effect were kept in place indefinitely, a continued surge in federal debt during the rest of this decade and beyond would raise the risk of a fiscal crisis … and would eventually reduce the nation’s output and income below what would [otherwise] occur.

This certainly isn’t the galvanizing language that would motivate congress to do something significant about the real debt: the $222 trillion debt the government currently owes.

House Speaker Boehner is holding firm against tax increases, for the moment. While Obama is giving indications that he might soften a little about raising taxes on the rich. But they’re only focusing on the sequesters that involve spending cuts of about $110 billion a year.

And the inevitable comments from Senator Tom Coburn that shows that the problem can be solved, we just need to work together:

It’s not all that hard. The problem is that nobody wants to do the hard work and then defend politically what they’ve done.

No, Tom, the problem is that no one, including you, is willing to look the problem squarely in the face and say, “Crummy little cuts in spending like $110 billion a year when the national debt is growing by $11 trillion every year are meaningless. Let’s get a grip here guys and do something substantial, like cutting spending by a trillion the first year and more next year and even more the year after that.”

That’s why bankruptcy is inevitable.

Bankruptcy CBO Economy Fiscal Cliff IRS John Boehner National Debt Obama Spending Taxes Taxmageddon Tom Coburn Unemployment
This entry was posted on Sunday, November 11th, 2012 at 3:22 pm and is filed under Economics, Politics. You can follow any responses to this entry through the RSS 2.0 feed. Both comments and pings are currently closed.
Many of the articles on Light from the Right first appeared on either The New American or the McAlvany Intelligence Advisor.