Double-Digit Unemployment May Be the New Normal 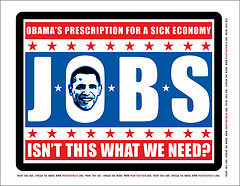 After parsing the unemployment report that was issued by the Bureau of Labor Statistics (BLS) on Friday, November 2nd, two scholars at the Heritage Foundation, Rea Hederman and James Sherk,  concluded that at the present jobs growth rate it could take another five years for a full jobs recovery to occur from the Great Recession. That would place the recovery after the next presidential election in 2016 and nearly ten years after the start of the recession in December 2007.

Noting that 125,000 new jobs must be created every month just to keep up with population growth, they turned to the “jobs calculator” offered at the website of the Federal Reserve Bank of Atlanta and asked it to determine how long it would take for job growth to return to normal, based on the average job growth over the past three months (170,000). The answer: the summer of 2017.

This assumption that future job growth would be maintained at that rate is laden with so many difficulties and subject to so many unknowns as to call the entire exercise into question. This is called “straight line thinking in a curvilinear world,” or, put another way, this assumes that the future will look like the past. It probably won’t.

For instance, there is the “fiscal cliff” and the great uncertainty about how the lame duck congress will deal with it, if they deal with it at all. Great speculation abounds about various scenarios but each concludes that such a monthly job growth assumption could be wildly off the mark, resulting in much lower job growth in the future.

Secondly, now that the president is free to work his will without having to face an unhappy electorate, the expected tsunami of regulations pouring out of Washington will certainly hamper job creators in the years ahead.

Thirdly the recession extending across the nations of the European Union will ripple across the Atlantic to slow American businesses even further.

Finally, the predictable moving of American jobs abroad to avoid the draconian impact of Obamacare mandates will further slow the economy and job growth.

Another Heritage scholar, J.D. Foster, has calculated that the president’s attempts to stimulate job growth have in fact fallen short by more than 7 million jobs. Foster’s thesis is simple: he took President Obama at his word. During the fall of 2008, Obama promised that he would create 2.5 million jobs by December 2010. Obama then revised his target upward, promising at the end of 2008 that he would create 3.5 million jobs. At that moment in time, employment stood at 135.1 million, so his revised “target” was 138.6 million jobs to be created by December 2010.

But the current jobs report showed only 133.8 million are employed, more than one million fewer than in 2008 and nearly 5 million short of Obama’s “target” number he promised by the end of 2010.

It’s now the end of 2012. Foster took Obama’s promise of 138.6 million and assumed that new jobs were added since then at just enough to absorb new entrants into the workforce – about 125,000 jobs every month. That revised Obama “target” would, if it had been accomplished, put the American workforce currently at 141.5 million. But the current employment report from the BLS shows only 133.8 million are employed.

Foster explains that it was faulty reasoning behind Obama’s failed promises that resulted in such a massive shortfall:

In effect, the theory says that if I take a dollar from my right pocket and put it in my left, then I’m a dollar richer. No wonder it always fails.

Foster thinks Obama’s promises were flawed from the beginning and that his policies are purposefully keeping the economy from growing:

Seemingly bent on perpetuating joblessness, Obama and his allies are seeking to raise some of the most damaging taxes possible. They seek to raise tax rates on the investors who are needed to provide seed corn for new businesses and on small businesses that use this seed corn to spur innovation and job growth. Foolish in the best of times, raising these economically punishing taxes in the face of high unemployment is indefensible.

The intentions of Obama and his congressional allies to raise tax rates on small businesses, on savers and investors, on the risk takers who propel the economy with their successes goes well beyond ideology to

As discouraging as the reports from these Heritage scholars may be, they could be too optimistic. With the unknowns facing the economy from the “fiscal cliff,” the coming wave of regulations, the ripple effect of Europe in recession, and the moving of jobs abroad to escape the Obamacare mandates, unemployment staying close to double digits for the foreseeable future may become the “new normal” and a full recovery from the Great Recession merely wishful thinking.

BLS Deficit Economy European Union Federal Reserve Great Recession Innovation Jobs Lame Duck Obama Obamacare Recession Regulations Spending Statistics Taxes Unemployment
This entry was posted on Sunday, November 11th, 2012 at 9:58 am and is filed under Economics, Politics. You can follow any responses to this entry through the RSS 2.0 feed. Both comments and pings are currently closed.
Many of the articles on Light from the Right first appeared on either The New American or the McAlvany Intelligence Advisor.