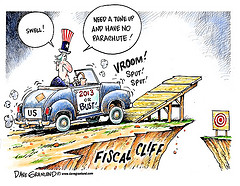 In its latest 14-page report on the impact the “fiscal cliff” would have on the economy in 2013 and beyond, the non-partisan Congressional Budget Office (CBO) provided enough ammunition to both sides of the debate to guarantee a standoff in Washington. It would have simplified matters greatly if Doug Elmendorf, the CBO’s director, had simply said: “Pay me now or pay me later. You decide.”

The “fiscal cliff” is a convergence of tax increases and spending cuts scheduled to become effective on January 1st 2013 that are complex enough to, in the words of Tevye in the film Fiddler on the Roof, “cross a Rabbi’s eyes.”

There are the Bush tax cuts from 2001 and 2003 which are due to expire, representing a tax increase that would affect most taxpayers, hitting higher earners especially hard. There are the mandatory spending cuts to military and domestic programs that resulted from the failure of Congress in August 2011 to make hard decisions about the deficit and national debt.

There is the expiration of the Alternative Minimum Tax (AMT) “patch” which would effectively raise taxes on some 27 million people. There is the scheduled ending of the payroll tax “holiday” which temporarily reduced employees’ contributions to Social Security from 6.2% to 4.2%. There is the Medicare “Doc Fix” legislation which, when it expires, would cut Medicare providers’ fees by 27 percent. And there’s the Medicare surtax of 3.8 percent that would apply to high income earners along with the expiration of the Bush tax cuts.

Put altogether, if the congress does nothing, the impact on the economy would mean a significant decrease in (but not elimination of) the deficit by an estimated $500 billion a year, but at a cost of a potential recession and significantly higher unemployment in 2013 and beyond.

Here’s how the CBO puts it:

If all of that fiscal tightening [their code for the “fiscal cliff”] occurs, real gross domestic product (GDP) will drop by 0.5 percent in 2013 … reflecting a decline in the first half of the year and renewed growth at a modest pace later in the year…

[But] if the fiscal tightening was removed and the policies that are currently in effect were kept in place indefinitely, a continued surge in federal debt during the rest of this decade and beyond would raise the risk of a fiscal crisis….

Or, as suggested, the tradeoff of “pay me now” – cut the budget deficit (through spending cuts and tax increases) severely now and suffer the pain – and “pay me later” – do nothing and let the deficits soar even higher – is the conundrum facing Washington. As Elmendorf put it:

Although reducing the fiscal tightening scheduled to occur next year would boost output and employment in the short run, doing so without imposing a comparable amount of additional tightening in future years would reduce the nation’s output and income…

[On the other hand] if all of the policies considered in this analysis were extended for a prolonged period beyond the two years assumed here, federal debt … would continue to rise much faster than GDP. Such a path for federal debt could not be sustained indefinitely….

Elmendorf recognized the painful tradeoffs facing the congress back in May 2012 when the CBO issued its interim report on the “fiscal cliff”, and asked

One possibility is to leave current law in place, accepting the short-run economic costs of sharp fiscal restraint in order to   put  the federal budget on a sustainable longer run trajectory.

Another possibility is to extend all current policies for a prolonged period, accepting the longer-run costs and risks of surging federal debt….

Elmendorf lives in the world of numbers, estimates and formulas and as a result is insulated from the real world of politics. Senate Minority Leader Mitch McConnell (R-Ky.) lives in that real world, and he said:

I know some people out there think Tuesday’s results mean Republicans in Washington are now going to roll over and agree to Democrat demands that we hike tax rates before the end of the year.

I’m here to tell them there is no truth to that notion whatsoever.

Grover Norquist, who designed the Taxpayer Protection Pledge which was agreed to by all but six of the 242 Republicans in the House, and all but seven of the 47 Republicans in the Senate, said that the election was no “mandate” for higher taxes, but instead those signing his pledge instead  “have a mandate to prevent tax increases.”

Gridlock is soon to become reality as the congress is finally forced to come face to face with the consequences of its profligate spending and its previous decisions to kick the can down the road.

There is no more road. Congress runs out of it on December 31st.  It’ll be something to watch.

Americans for Tax Reform Bush Tax Cuts CBO Deficit Democrat Economy Fiscal Cliff Gridlock Grover Norquist Medicare Military Mitch McConnell Recession Republican Senate Social Security Spending Taxes Taxmageddon Taxpayer Protection Pledge Unemployment
This entry was posted on Sunday, November 11th, 2012 at 5:31 pm and is filed under Economics, Politics. You can follow any responses to this entry through the RSS 2.0 feed. Both comments and pings are currently closed.
Many of the articles on Light from the Right first appeared on either The New American or the McAlvany Intelligence Advisor.