W and the GOP Gave the Election to Obama 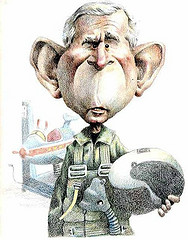 This no doubt will upset some people but, in my opinion, Pastor Baldwin has properly called out the Republican Party for giving the election to Obama. On the good side, he thinks little has changed in Washington as a result of the election. On the other side, the fight for freedom was not advanced in any significant or measurable way. And that he blames on the GOP:

Ever since Reagan, Republicans have routinely rejected legitimate freedomists and have nominated pseudo-conservatives. The result has always led to a resounding defeat for Republicans at the polls. Since the defeat of George H.W. Bush after one term in 1992, due to his blatant big-government and globalist policies, Democrats have dominated the White House. The lone exception was the election of G.W. Bush in 2000 and 2004. But, Bush, Jr., ran as a Reagan-conservative. He wasn’t, of course, but he was perceived as one.

But it was Bush, the Big-Spending-Warmonger, that doomed the GOP’s future [efforts]. Bush’s out-of-control deficit spending, coupled with his preemptive wars of aggression, and the implementation of a burgeoning police state/surveillance society made the name “Republican” something dirty to the American electorate. As a result, the GOP is in complete disarray and without principled leadership.

The GOP picked someone who simply couldn’t win, while ignoring the one man who could have won handily: Ron Paul.

Mitt Romney was just the latest attempt by the GOP establishment to force a big-government “moderate” upon party faithful. The true freedomist Ron Paul was treated in much the same way that Pat Buchanan was treated back in 1996. By hook or by crook, the GOP was not going to let a principled freedomist win the Presidential nomination. They wanted a controlled big-government toadie. They got what they wanted, and they lost!

Baldwin then gets to the good stuff: why should we vote for the GOP? He dispenses with a lot of foolishness and gets to the main point:

Republican propagandists can complain all day long about principled freedomists who choose to vote for a third party or not vote at all for a given race. But they shouldn’t blame the voters; they should cast blame where it rightly belongs: at the feet of the GOP leadership.

I no more owe allegiance to a political party than I would owe allegiance to a retail store. If the business does not convince me by its product, service, and price to shop there, I am under no obligation to do so. I will go down the street. It’s laughable to think that I owe my business to one store…

It is equally laughable to suggest that I owe my vote to one political party. Each candidate has an obligation to convince me that he or she is worthy of my vote. When he or she does, my vote is given them. But when a candidate doesn’t earn my vote, they are not getting it–regardless of party label.

He has this to say about die-hard Republicans:

Oh sure, you have the party loyalists who would vote for their party’s candidate if a baboon was nominated. Thankfully, the numbers of these types of voters are quickly shrinking.

I know at least one of these. I heard him say, in public, the most inane comment in recent memory: we have to be loyal to the Republican Party, no matter what! In public!

Baldwin reminds us of how Paul was treated. It speaks volumes about the GOP:

All over America, in State after State, the GOP leadership bullied, harangued, and stomped on Ron Paul and his supporters. The way Ron and his followers were treated in many State GOP conventions and in the national GOP convention was nothing short of criminal. Had Mitt Romney behaved as a gentleman and not like a vengeful tyrant, had the GOP leadership treated Ron and his supporters with the respect and dignity that they had earned, this election might have turned out differently.

Frankly, Mitt Romney deserved to lose, not only due to his big-government, liberal track record, which is out of step with rank and file freedomists, but also due to the shameful treatment of Ron Paul and his supporters, which he either knowingly tolerated or may have even orchestrated.

There it is, friends: the GOP is no friend of liberty.

2012 Elections Chuck Baldwin Deficit Democrat Establishment Freedom Liberal Liberty Mitt Romney Obama Republican Ron Paul
This entry was posted on Sunday, November 11th, 2012 at 12:04 pm and is filed under Constitution, Politics. You can follow any responses to this entry through the RSS 2.0 feed. Both comments and pings are currently closed.
Many of the articles on Light from the Right first appeared on either The New American or the McAlvany Intelligence Advisor.