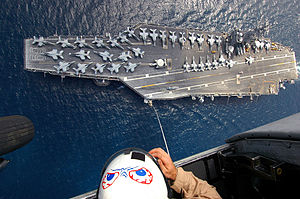 Now that we are focusing on life after the election, the fiscal cliff looms. And if Congress does nothing, the military budget will be “slashed” – by some $50 billion or so a year. That’s about 7 percent of the total military budget.

That will never happen. Congress will not allow it. The New York Times says so. Aaron O’Connell, author of the Op-Ed piece appearing there on Sunday, is a history professor at the Naval Academy and a Marine reserve officer. So he writes from the inside, and with a bias. But he thinks the militarization of the country is permanent. He starts with President Eisenhower‘s warning about the military-industrial complex in 1961:

[Eisenhower] worried that the defense industry’s search for profits would warp foreign policy and, conversely, that too much state control of the private sector would cause economic stagnation. He warned that unending preparations for war were incongruous with the nation’s history. He cautioned that war and war making took up too large a proportion of national life, with grave ramifications for our spiritual health.

He notes that the US spends $700 billion on defense, which is half of all military spending in the world! – but it’s only about 5 percent of Gross Domestic Product. And we don’t have a garrison state, at least not yet. And the country has benefited from numerous “beneficial” technologies, including “the Internet to civilian nuclear power to GPS navigation.” And even military adventures abroad aren’t as bad as they once were:

Foreign policy has become increasingly reliant on military solutions since World War II, but we are a long way from the Marines’ repeated occupations of Haiti, Nicaragua and the Dominican Republic in the early 20th century…

The real problem, he says, is “spiritual” by which I think he means moral:

Our culture has militarized considerably since Eisenhower’s era, and civilians, not the armed services, have been the principal cause. From lawmakers’ constant use of “support our troops” to justify defense spending, to TV programs and video games like “NCIS,” “Homeland” and “Call of Duty,” to NBC’s shameful and unreal reality show “Stars Earn Stripes,” Americans are subjected to a daily diet of stories that valorize the military while the storytellers pursue their own opportunistic political and commercial agendas…

But for [most of the country] — including about four-fifths of all members of Congress — there is only unequivocal, unhesitating adulation. The political costs of anything else are just too high.

Cuts to the military budget? Please!

The fact that both President Obama and Mitt Romney are calling for increases to the defense budget (in the latter case, above what the military has asked for) is further proof that the military is the true “third rail” of American politics. In this strange universe where those without military credentials can’t endorse defense cuts, it took a former chairman of the Joint Chiefs, Adm. Mike Mullen, to make the obvious point that the nation’s ballooning debt was the biggest threat to national security.

We can snidely refer to Congress’ unfailing ability to kick the can down the road to avoid making hard decisions. This time, Congress will intervene to keep those automatic cuts left over from the Budget Control Act of 2011 from happening. Count on it.

Defense Spending Eisenhower Fiscal Cliff Foreign Policy Internet Military Mitt Romney Obama Private Sector Spending Taxmageddon Video War
This entry was posted on Thursday, November 8th, 2012 at 12:02 pm and is filed under Economics, Foreign Policy, History, Politics. You can follow any responses to this entry through the RSS 2.0 feed. Both comments and pings are currently closed.
Many of the articles on Light from the Right first appeared on either The New American or the McAlvany Intelligence Advisor.