Obama Intends to Bring Down Capitalism 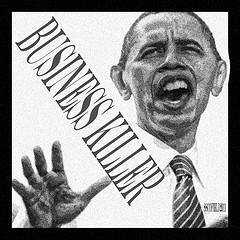 I have great respect for the work done by the Cato Institute. I attended one of their week-long economic seminars a couple of years ago, thanks to my generous brother, and was greatly impressed and informed by their work. I still refer to the copious notes I took there.

But Alan Reynolds fails to see that Obama intends the results of his actions. Reynolds explains Obama’s actions through abysmal economic ignorance:

In a recent Wall Street Journal op-ed (November 2) President Obama wrote that “in the eight years after” Bill Clinton left office, “we followed a different path. Bigger tax cuts for the wealthy we couldn’t afford. . . . The result of this top-down economics? Falling incomes, record deficits, the slowest job growth in half a century, and an economic crisis . . .”

Obama had taken up that theme during the first presidential debate, arguing that “The approach that Governor Romney’s talking about is the same sales pitch that was made in 2001 and 2003, and we ended up with . . . the worst financial crisis since the Great Depression.”

This is a remarkably imaginative theory — albeit one that reveals appalling economic illiteracy. Who else would have imagined that the housing bust and subprime-mortgage crisis were actually caused by cutting the top two tax rates in mid-2003?

He goes on say that at least Obama is consistent in his ignorance:

In the second debate, Obama repeated that “The last thing we need to do is to go back to the very same policies that got us there” — meaning top marginal tax rates that were slightly reduced, yet still higher than in 1988–92. Instead, he proposed, “for [incomes] above $250,000, we can go back to the tax rates we had when Bill Clinton was president. . . . That’s part of what took us from deficits to surplus. It will be good for our economy and it will be good for job creation.”

He misses the point. Obama intends the results of his actions. He intends to destroy what’s left of the capitalist system by reducing incentives by its capitalist innovators to the point where the economy stops working altogether.

Now proving intention is difficult, and likely impossible here in this short blog. But please remember that Obama has been steeped since childhood in the anti-capitalist theories of his mentor, communist Frank Marshall Davis. Which leads us to the 10 planks of the Communist Manifesto. One of those planks designed to bring down the capitalist system should suffice at least to open the discussion:

Reynolds can see the results of Obama’s policies:

What about Obama’s plans to raise other tax rates on upper incomes? The Obama Treasury estimates that taxing long-term capital gains at 20 percent “for upper-income taxpayers” (not counting the Obamacare surtax) would raise $5.8 billion in 2013, but lose $5.9 billion in the following two years. That adds up to less than zero. Treasury foolishly expects some small change from raising the dividend tax from 15 percent to 43.4 percent, but the resulting flight from stocks would obviously crash both the market and the economy.

What he refuses to see is that Obama intends those results:

Barack Obama does not understand economics and apparently refuses to listen to those who do.

Reynolds is wrong on both counts. Obama does understand and he knows exactly what he is doing.

2012 Elections Bill Clinton Capitalism Cato Institute Deficit Economy Frank Marshall Davis Great Depression Income Tax IRS Mitt Romney Mortgage Crisis Obama Obamacare Surplus Wall Street
This entry was posted on Wednesday, November 7th, 2012 at 2:38 pm and is filed under Economics, Politics. You can follow any responses to this entry through the RSS 2.0 feed. Both comments and pings are currently closed.
Many of the articles on Light from the Right first appeared on either The New American or the McAlvany Intelligence Advisor.