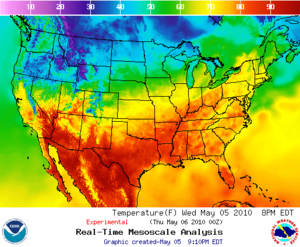 As inevitable as the canard that Hurricane Sandy is going to be good for business is this one: those nasty capitalists running hardware stores and gasoline stations are gouging the public with high prices. They need to be stopped! Price controls will do it!

Mark Perry thinks so too, and has proposed a remedy: a maximum temperature law. After all, the last two summers have been unreasonably – no! unconscionably! – hot:

The extreme heat waves during the last two summers, and the hardships they have caused for millions of Americans (including 82 heat-related deaths this year), firmly establishes that we are at the mercy of a very cruel, ruthless, merciless, cold-hearted, and uncaring force: Mother Nature.

Something needs to be done about it! Politicians, take notice! Another opportunity to right a wrong, to establish Justice and promote the American Way!

Without some kind of government intervention in the market for high temperature readings being registered on existing thermostats, Mother Nature will continually and ruthlessly expose Americans to harsh summer conditions of unconscionably high temperatures. Who among us wouldn’t agree that the excessively high summer temperatures this year were a form of unfair “temperature gouging”?

To counteract the injustice of temperature gouging, let me propose a Maximum Temperature Law that will force all thermostats sold in the United States to have a maximum, reasonable and fair temperature reading of let’s say 90 degrees Fahrenheit.  As part of the new legislation, all existing thermostats in homes, offices, and businesses should be immediately replaced with new thermostats with a maximum reading of 90 degrees.

We need to enforce this law with all the power of government!

Any temperatures above the 90 degree maximum will be considered to be unconscionably excessive, and will be outlawed by the Maximum Temperature Law, with violations subject to penalties, fines and possible jail time for thermostat manufacturers continuing to sell thermostats with temperature readings above the government-mandated maximum.

Further, all news and weather reports, all TV and radio stations, and all newspapers and websites would be immediately prohibited from quoting any temperatures above the legal maximum of 90 degrees F.

He’s kidding, of course. This preposterous solution to high temperatures illustrates the perfect absurdity of price controls on gasoline, duct tape, and plywood:

If the Maximum Temperature Law seems like a totally ridiculous solution to extremely warm weather, that’s because it is totally ridiculous.  And so are price gouging laws equally a ridiculous solution to shortages and rising prices following extreme weather like Hurricane Sandy.  Both solutions suffer from the same faulty logic of requiring the dissemination of inaccurate and untruthful information, about the temperature in the first case and about relative scarcity in the second case.

All price controls do is disrupt the normal functioning of the free market and result, inevitably always and forever, in shortages. They in turn lead to more government solutions to the problem caused by the government intervention: rationing!

Preventing prices for essential goods from rising to their true market value will now cause distortions, shortages and inefficiencies in the market because the artificially low prices won’t accurately and truthfully reflect the reality of increased scarcity. Instead, we’ll suffer from a government-mandated fantasy world where prices are forced to be disconnected from their market fundamentals.

What a wonderful analogy to slay the price control myth that rises whenever there is a natural disaster.

Free Market Price Controls Price Gouging
This entry was posted on Monday, November 5th, 2012 at 9:27 am and is filed under Constitution, Economics. You can follow any responses to this entry through the RSS 2.0 feed. Both comments and pings are currently closed.
Many of the articles on Light from the Right first appeared on either The New American or the McAlvany Intelligence Advisor.