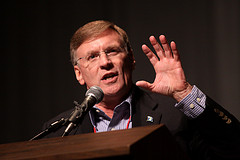 Baldwin is a remarkable man. His Wikipedia entry is almost a puff piece, but you can’t avoid noting his character, his willingness to take a stand, and to make tough decisions in accordance with the light he has been given. This from Wiki is especially revealing:

In 2010, Baldwin retired from his position as pastor of Crossroad Baptist Church and announced his intention to move to Montana, because he believed God had told him that the Mountain states were the “tip of the spear in the freedom fight.”

In March 2011, he wrote an article in support of the American Redoubt concept originated by novelist and blogger James Wesley Rawles. This plan designates five western states (Idaho, Montana, Wyoming, eastern Oregon, and eastern Washington) as a safe haven for conservative Christians.

In a June 9, 2011 article, Baldwin outlined his reasons for choosing the Flathead Valley of Western Montana for his family’s home. He cited Montana’s freedom-loving people, its recognition of the right to keep and bear arms, and a feeling of strong conviction, following prayer.

And so, when he speaks, I listen:

This will cause “conservatives,” Christians, and most Republicans to go into a state of deep hibernation, which will allow Romney to wreak havoc upon the Constitution and liberties of the people.

In 2012, Barack Obama is the “Boogeyman” that must defeated at all costs. But the fact is, with the exception of Romney’s more business-friendly approach to economics, the differences between Obama and Romney are negligible.

He reiterates the similarities between the two candidates, ad nauseam:

And then he gets to the good stuff. Hand on tight here. Baldwin quotes Steve Baldwin (no relation), a former California State legislator and former Executive Director of the Council for National Policy. Steve has done some extensive digging into Romney’s background. This exceeds anything I have uncovered:

I don’t care how his campaign portrays him today, his record as Governor is far more indicative of how he will govern than his campaign sound bites. If you’re not familiar with what I am disclosing about Romney, it’s because the truth about Romney was kept from Republican voters.

The conservative movement sold out to Romney. Starting in 2004, Romney created a slew of PACS and foundations that funneled thousands of dollars to hundreds of conservative groups, think tanks, grass-roots leaders and GOP entities.

In return, many of these entities that normally would have attacked Romney during the presidential primary went silent or even promoted him. I’ve tracked all of Romney contributions to conservative and GOP groups and it’s disgusting. It means that the leadership of our own conservative movement is up for the highest bidder and cannot be trusted to do the right thing.

Even National Review, the nation’s leading conservative publication, took money from Romney and for the last six years blocked all articles critical of Romney. Instead, they published a slew of articles portraying him to be a conservative superstar. It was all phony and I can prove it.

Romney will be our next President. But he will do NOTHING to stem the tide of coming disaster. Romney will be a military hawk of the highest order. And while corporations doing business with the military-industrial complex will reap huge profits, America’s continued foreign interventionism is going to bring us to the brink of World War III.

Furthermore, it is the “we are at war” mantra that is used to justify a burgeoning police state in America, which Romney will enthusiastically continue to implement. And unlike the Democrat Barack Obama, the Republican Mitt Romney will have little resistance–except from a Democrat-controlled Senate.

He then offers this likelihood for 2016:

I must remind readers that the reason Barack Obama was elected to begin with was due to the eight years of the phony-conservative G.W. Bush administrations. Americans were disillusioned and angry over Bush’s huge spending habits at home and his military adventurism overseas.

I predict a Mitt Romney presidency will have the same effect. As with G. W. Bush, Mitt Romney will disappoint and anger the American electorate, which will pave the way for another leftist (Hillary Clinton?) to prevail in 2016.

Chuck Baldwin Conservative Democrat Freedom Gun Control IRS Liberal Military Mitt Romney Obama Republican Spending TSA War
This entry was posted on Sunday, November 4th, 2012 at 6:56 am and is filed under Politics. You can follow any responses to this entry through the RSS 2.0 feed. Both comments and pings are currently closed.
Many of the articles on Light from the Right first appeared on either The New American or the McAlvany Intelligence Advisor.