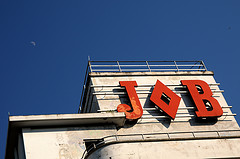 On the surface, Friday’s jobs report from the Bureau of Labor Statistics (BLS) looked pretty good, and the response from establishment economists was predictable: the economy continues to grow, Obama’s policies are working, just give them time, and so forth.

For the record, BLS reported that “total non-farm payroll employment increased by 171,000 in October, and the unemployment rate was essentially unchanged [from September] at 7.9 percent.” It disclaimed any impact that Hurricane Sandy had on these numbers as the data upon which their report was based had been collected before the storm.

Diane Swonk, an economist at Mesirow Financial told CNBC: “The consumer’s feeling a little bit better…[employers] are not hiring out like crazy, but certainly you’ve got to welcome these kinds of numbers.” And Arne Kelleberg, professor of sociology at the University of North Carolina, claimed the report proved that “the fundamentals are strong. I do see the cyclical aspects of the unemployment situation being rectified.” This is professor-ese for: yup, things are looking good.

Official Obama cheerleader Alan Krueger, chairman of the president’s Council of Economic Advisors, added: “We’re moving in the right direction. What we need to do is build on this progress…”

A look behind the headline numbers is revealing. Employment gains for the year have averaged 157,000 jobs per month, only marginally higher than in 2011. Net improvement over the past year? None.

Most of the 171,000 new jobs were in the service sectors: professional and business services, health care providers, and retail stores. Manufacturing showed no gain month-over-month, while the mining industry lost 9,000 jobs.

Digging even deeper into the numbers, the BLS noted that “the unemployment rate for blacks increased to 14.3 percent in October” – an increase of nearly one full percent in just one month – and the number of long-term unemployed (those jobless for 27 weeks or more) was little changed at 5.0 million.” Translation: October’s jobs report reflects no substantive change in the employment picture when compared to last month.

Even those “marginally attached” to the labor force – the BLS doesn’t count anyone who wanted to work and were available for work but hadn’t looked for work in the last month – remains at 2.4 million.

And still deeper: those being hired are being paid less than they were previously, as reflected by the decline in hourly wages compared to September. The BLS reported: “Over the last 12 months, average hourly earnings have risen by 1.6 percent,” not enough to keep up with inflation.

And according to the institutional research firm Capital Economics, this increase in average hourly earnings is the slowest in the past 26 years.

Not reported by the BLS is how the average household is doing on a net-after-tax, inflation-adjusted basis. Here is the unreported bad news: median household income has declined by $4,520 a year (8.2 percent) since President Obama took office in 2009. The BLS report merely confirms that this trend will continue into the foreseeable future.

As Jeffrey Bartash of MarketWatch noted, “When discouraged job seekers and those forced to work part-time jobs are included, the unemployment rate [for October was] 14.6%.”

Although the president is touting the recovery as a boost to his reelection chances, it should be noted that nearly 8 million jobs were lost during the Great Recession and just 4 million of them have been created, if one is to believe the BLS. Marketwatch.com put the recovery into perspective with a series of graphs, one of which shows how long it took for the economy to recover fully from previous recessions. It took just 27 months for jobs to return to normal levels following the recession of 1981, and just over 30 months to recover from the 1990 recession.

It took nearly 45 months for jobs to recover fully from the recession that began in 2001, but job recovery from the Great Recession is nowhere near that point now. A simple projection into the future predicts that all jobs lost won’t be regained, at present rates, until at least 2015 or later.

There’s no way that Friday’s jobs report from the BLS could have included this, but John Challenger, of Challenger, Gray & Christmas, an international human resources firm, separately noted that planned layoffs by U.S. firms jumped an astonishing 41 percent in October, the highest since May and even higher than those announced in October a year ago. Those 47,000 layoffs will no doubt show up in the BLS numbers in December, long after the election is history.

Nevertheless, there is election history to be made. According to the Los Angeles Times:

If President Obama wins reelection, he’ll set a record. He’ll be the first incumbent president since Franklin Roosevelt to win a second term when unemployment stood above 7.4%.

If he loses, he’ll join Jimmy Carter, George H. W. Bush and Gerald Ford as incumbents who lost when joblessness was above 7.0%.

2012 Elections BLS Council of Economic Advisors Economy Establishment Gerald Ford Great Recession Health Care Inflation Jimmy Carter Jobs Obama Recession Statistics Unemployment
This entry was posted on Sunday, November 4th, 2012 at 3:11 pm and is filed under Economics. You can follow any responses to this entry through the RSS 2.0 feed. Both comments and pings are currently closed.
Many of the articles on Light from the Right first appeared on either The New American or the McAlvany Intelligence Advisor.