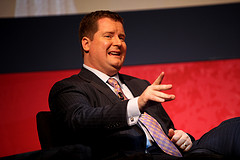 I’m looking forward to Wednesday for lots of reasons, most of which you can surmise: the noise, the chatter, the incessant drumbeat of political ads interrupting every TV program, the constant ringing of pollsters on my phone, the yard signs, the answering the inevitable question: who do you think is going to win?

For Erick Erickson, of RedState, the race is already over:

We are less than a week from the election.

At this point, I just want it over.  I want my life back.  I’m worn out.  I am struggling to still care now that I have cast my absentee ballot.

I think most Americans feel that way.  The people of Ohio and Florida are begging for a return to TV ads for male enhancement drugs and self-lubricating catheters.

I could refer you to Real Clear Politics which reviews and summarizes the various polls. Or you could go to Rasmussen. Or Intrade. But Erickson can’t resist making his own predictions, through gritted teeth, it sounds like:

There is worry among a lot of Republicans who spend too much time on Twitter that somehow Hurricane Sandy and Chris Christie have shifted momentum in the race back to Barack Obama.  I don’t think so.  I think Romney has a ton of independent voters.  While I don’t think he will win Pennsylvania, I think those Democratic voters who decided to ignore Barack Obama on the Democratic Primary ballot earlier this year are a bigger problem that has been overlooked nationwide.

A lot of Democrats may not vote for Mitt Romney, but they may sit it out for Barack Obama.  Gallup, Pew, and other pollsters show Republicans doing very well in early voting — better than 2008 and better than Obama in many cases.  Several pollsters, including Gallup, predict a higher Republican turnout than Democrat turnout.

If Republicans and Democrats are within three points of each other in turnout and Mitt Romney is winning independent voters by double digits, which he is, relax and go vote.  The fat lady is warming up her vocals.  Harness the uneasy feeling and participate in phone banking.

As I say, I’m looking forward to Wednesday…

2012 Elections Chris Christie Democrat Mitt Romney Obama Rasmussen Republican Twitter
This entry was posted on Saturday, November 3rd, 2012 at 4:31 pm and is filed under Politics. You can follow any responses to this entry through the RSS 2.0 feed. Both comments and pings are currently closed.
Many of the articles on Light from the Right first appeared on either The New American or the McAlvany Intelligence Advisor.