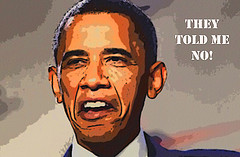 It was OK in 2008 to hitch your wagon (if you were a Democrat) to Obama’s star and ride his momentum into office. Today? Not so much. Writing in the Washington Times, David Sherfinski says that, downstream, those same Democrats are putting some distance from Obama this time around:

President Obama’s hope-and-change coalition powered his party to wins up and  down the ticket in 2008, but the campaign this year has taken on a far more  self-serving focus, as both Mr. Obama’s  campaign and his fellow Democrats see benefits in keeping their space from each  other.

In Arizona, Richard Carmona, a Democrat, is running against Rep. Jeff Flake, and is happy to see that Obama is otherwise occupied and not making any efforts to help his campaign:

And Ann Kirkpatrick who rode Obama’s coattails into office in 2008 but was booted in 2010 is trying to regain her seat, this time without Obama’s help:

“The president is absent from any of her last two campaigns,” said Barrett  Marson, a spokesman for her Republican opponent, Jonathan  Pason. “You wouldn’t know who was president, and you wouldn’t know he was  the leader of her party by looking at her material.”

There are other examples as well, but the point is made: if your ship is sinking, you want to get off as fast as you can. As Salena Zito noted in Pittsburgh’s Tribune-Review:

Barack Obama is running the kind of  presidential campaign that provides short coattails to any Democrats running  down-ballot.

That reduces any chance House Democrats might  have to regain a majority in this election cycle.

Obama is not running on what he accomplished in the past four years, nor on what he wants to do in the next four. He is running on a cult of personality.

And the more voters learn about the guy, the less they like him. We’ll see if Romney’s “surge” in the polls is really about Romney, or instead more about rejection of Obama.

2012 Elections Democrat Obama Polls Republican
This entry was posted on Thursday, November 1st, 2012 at 4:32 pm and is filed under Politics. You can follow any responses to this entry through the RSS 2.0 feed. Both comments and pings are currently closed.
Many of the articles on Light from the Right first appeared on either The New American or the McAlvany Intelligence Advisor.