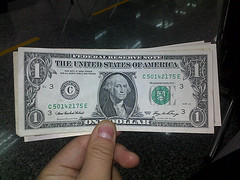 The preliminary report on the country’s gross domestic product (GDP) issued on Friday by the Bureau of Economic Analysis (BEA) was called a “nasty October surprise” by James Pethokoukis at the American Enterprise Institute. On its face the report noted that the nation’s economic output during the third quarter exceeded economists’ expectations, growing at an annualized rate of 2 percent when it was expected to grow at only 1.7 percent. This was a significant jump from the second quarter which notched a poor 1.3 percent annualized rate of growth.

But Pethokoukis, an expert at parsing such reports, found little about which to rejoice. For instance, the economy has only averaged 2.2 percent annual growth since the Great Recession  officially ended in June 2009 and Friday’s report showed essentially no change from that average. In fact, when this year’s first quarter and second quarter growth rates are averaged, the economy grew at 1.65 percent, triggering the distinct probability, according to Pethokoukis, of another slip into recession.

Relying on data from both the Federal Reserve and Citigroup, Pethokoukis offered three reasons why another recession is likely:

First, consumers are slow to realize that the economy is slowing and modify their behavior belatedly. Second, a fragile slow-growth economy is especially susceptible to outside shocks. Finally,

As the economy slows beyond some threshold growth rate, the decline in growth — in and of itself — undercuts confidence and stokes fears that growth may continue to fall. In response, households and firms tend to cut their expenditures and begin to hunker down. Such dynamics could easily become self-reinforcing and drag growth down further.

That already appears to be happening. Ford Motor Company and Dow Chemical Company are just two of a growing number of Fortune 500 companies that are laying off workers at record rates. Just since September 1st, North American companies have announced they are firing more than 60,000 workers, the biggest drop since the start of 2010 (when the Great Recession was supposed to be in recovery). So far this year nearly 160,000 workers have lost their jobs in these companies, 30,000 more than those who were fired over the same period last year.

To add to the misery, earnings reports over the past weeks have been sobering: out of 204 companies reporting so far, 120 of them have reported that sales were below analysts’ expectations. This is a precursor to additional layoffs, according to John Challenger, head of Challenger, Gray & Christmas, Inc., the oldest executive outplacement firm in the country.

Said Challenger, sales misses are “a sure prescription for layoffs starting to heat up as companies take immediate action to show their shareholders how responsive they are.”

Hewlett-Packard’s announcement that it was laying off 29,000 of its workers exceeded its initial estimates, and Bloomberg said that banks are planning to eliminate another 19,000 positions as the economy continues to falter.

Even one of the bright spots in the BEA report — that consumer spending in the third quarter had exceeded experts’ expectations — was dampened when it was revealed that that spending came out of savings.

USA Today’s survey of economists’ expectations for next year was muted, with estimates that economic growth will remain at about 2 percent next year, that unemployment will drop only slightly to 7.6 percent by next December, and that the economy will be unable to generate enough new jobs to absorb new workers entering the workforce.

Even the enthusiasm that initially greeted the Thomson Reuters/University of Michigan’s consumer sentiment index, showing a rise to 82.6 in October from 78.3 in September, was muted with disclaimers that this was an aberration likely to be reflected in a sharp downturn over the next couple of months. Survey Director Richard Curtin warned:

Unless the [discussion in Washington over the pending “fiscal cliff”] is carefully managed by whoever wins, the debate could produce the same depressing effect on consumer confidence as last year’s debt ceiling fiasco.

While the surge in confidence will act to bolster consumer spending during the upcoming holiday season, it also means that this higher level of confidence is more vulnerable to reversal and has thus raised the stakes for post-election economic policies.

This is how a pollster covers his bets: yes, the numbers are positive, but don’t get too excited about them. As Pethokoukis said, the GDP report was a “nasty October surprise,” and additional nasty surprises could be in store as Congress struggles to deal with reality in the upcoming lame duck session.

Debt Ceiling Double-Dip Recession Economy Federal Reserve GDP Great Recession Jobs Lame Duck Recession Spending Unemployment
This entry was posted on Tuesday, October 30th, 2012 at 6:37 am and is filed under Economics, Politics. You can follow any responses to this entry through the RSS 2.0 feed. Both comments and pings are currently closed.
Many of the articles on Light from the Right first appeared on either The New American or the McAlvany Intelligence Advisor.