The Trouble with Outright Monetary Transactions 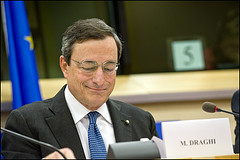 Mario Draghi, President of the European Central Bank (ECB), spoke before Germany’s Parliament on Wednesday, defending his decision to purchase government bonds from member states needing financial assistance but without unleashing inflation. Similar to the Federal Reserve’s continuing attempts to stimulate the economy through the purchase of government securities, called Quantitative Easing, or QE, Draghi’s Outright Monetary Transactions, or OMT, “will not lead to inflation,” he claimed in the closed-door session. He said:

In our assessment, the greater risk to price stability is currently falling prices in some euro-area countries. In this sense, OMTs are not in contradiction to our mandate; in fact, they are essential for ensuring we can continue to achieve it.

This is utter nonsense, wrote Mish Shedlock, in his blog Global Economic Analysis. Since Draghi’s “mandate” is similar to that of the Federal Reserve — that is, to maintain price stability along with low unemployment — it’s impossible to increase the supply of money by buying government bonds with credits created out of thin air without eventually unleashing price inflation at the consumer level in the economy. Shedlock wrote:

The problem with such nonsense is you cannot break the law while screaming you are upholding it. Draghi now sounds and acts like hypocr[itical] US presidents of both political parties.

Both President Bush and President Obama (as well as the treasury departments under each administration) have shown little concern for the law. Increasingly presidents are of the mind [that] “we have to destroy capitalism [in order] to save it” or as President Bush stated and Obama practices: “ I’ve abandoned free-market principles to save the free-market system.”

What the members of the German Parliament wanted to hear was that Draghi would not be bailing out bankrupt governments with their money. This is how Draghi phrased it:

OMTs will not lead to disguised financing of governments. All this is fully consistent with the Treaty’s prohibition on monetary financing. Moreover, they will focus on shorter maturities and leave room for market discipline.

But of course that is exactly what Draghi will do. That’s what central banks do: They bail out banks and their governments when they get into trouble. The bailouts always come with strings attached: The troubled governments seeking ECB funds will have to “agree to conditions” in order to get them, according to Draghi.

How did Draghi achieve such preeminence? It was a three-step process, according to Matthew Lynn. Writing in MarketWatch, Lynn noted:

In the last few weeks, the ECB has vastly expanded its influence over the lives of the continent’s citizens. Back in the summer, Draghi promised he would do “whatever it takes to save the euro.” What it took, it turned out, was a series of measures to put himself in charge of everything.

Step one was the bond-buying plan, the so-called OMT, or [Outright Monetary Transactions]….

Step two … was to create a banking union with the ECB as the lead regulator … Draghi … will now take on responsibility for controlling banks right across the [entire Euro zone]. Nothing will happen in the financial markets for 17 countries without it getting the nod from [Draghi]….

The new powers make the ECB president by far the most powerful figure in the financial world.

The ECB president will suddenly be able to control not just interest rates, but pretty much all the key economic variables for the world’s biggest economic area.

But who oversees Draghi? Explains Lynn: “The ECB isn’t elected or accountable to anyone. A fiscal deficit is being replaced by a democratic deficit.”

The real power lies with the European Council, which is basically answerable to no one. The EU … is a profoundly anti-democratic body with few checks and balances on the enormous power it wields…

The EU is … moving aggressively ahead with a political union to complement its economic one — whether Europe’s citizens really want it or not.

Wile’s assessment exactly matches that of another observer, Ambrose Evans-Pritchard, writing for the London-based Telegraph:

A whole super state structure is coming into being. It cannot be democratic because there is no European political nation or shared political language, and all attempts to mimic the vibrant democracies of the ancient states have failed. The European Parliament has its charms but it is not a body that can hold a powerful executive to account.

Eurosceptics warned from the outset that EMU [European Monetary Union] was unworkable as constructed. Monetary union would engender crises that forced ever more extreme solutions to keep the show on the road, acting as a powerful catalyst for full political union. They have been entirely vindicated. This is exactly what has happened.

Draghi, the man characterized by Lynn as “the most powerful person in the global economy,” is merely a bit player in the grand scheme. He certainly has all the credentials: a PhD in economics from MIT, a fellow at the Institute of Politics at Harvard, former Executive Director at the World Bank, past governor of the Bank of Italy, former board member of the Bank for International Settlements (BIS), and a past vice chairman and managing director of Goldman Sachs International.

And he received all the right endorsements when his name was suggested as just the man to replace outgoing ECB President Jean-Claude Trichet last year. Establishment papers like the British Financial Times endorsed Draghi as “the best candidate for the position.” The Economist, London’s equivalent to the Wall Street Journal, unblushingly wrote that “the next president of the world’s second-most-important central bank should be Mario Draghi.” And Germany’s finance minister, Wolfgang Schauble, announced in April 2011 that he “is open to Mr. Draghi for the post of ECB President.”

Nowhere was there a single ringing endorsement from any commoner in any of the eurozone countries that he is now ruling. This is how the game is played: Plan for a political union by introducing an untenable currency. When the inevitable crises hit, institute more “solutions” to the economic problems by introducing more political answers.

The ECB, the European Union and the euro itself have all proven immensely destructive to Europe. The individual countries making up Europe are in flames as a result of the euro and what is evidently and obviously a plan by global powers-that-be to introduce yet more chaos into the world in order to prepare it for full-on global governance.

Draghi’s closed-door talk to the German Parliament on Wednesday was just another step towards that end.

Bailouts Banking Capitalism Central Bank Deficit Democrat Economy Establishment European Central Bank European Union Eurozone Federal Reserve Goldman Sachs Inflation Interest Rates Obama Quantitative Easing Treaty Unemployment World Bank
This entry was posted on Monday, October 29th, 2012 at 6:37 am and is filed under Economics. You can follow any responses to this entry through the RSS 2.0 feed. Both comments and pings are currently closed.
Many of the articles on Light from the Right first appeared on either The New American or the McAlvany Intelligence Advisor.