Keep Your Eye on Elena Kagan 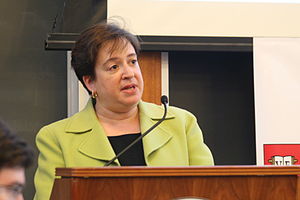 The case now before the Supreme Court, Kirtsaeng v. John Wiley & Sons, is a test of the “first sale doctrine,” also known as the “right of first sale,” the “first sale rule,” or the “exhaustion rule.”

Here’s the problem: such a doctrine creates an exception to a copyright holder’s right to distribute his product. Once he has made the “first sale” his interest in that product is “exhausted.” The new owner of the product can do with it as he wishes.

The story is interesting. But keep in mind that I want to talk about Elena Kagan and her likely decision on the matter, as it appears that she will have the deciding vote:

The case revolves around Thailand native Supap Kirtsaeng, who moved to  the  U.S. for college and found that it was cheaper to buy textbooks back  home than  here. So he plotted to have his family buy the less expensive  textbooks and  ship them to the U.S., where he made about $900,000 on  eBay, undercutting the  publisher’s prices.

The Supreme Court will now review the case, after a lower court ordered  him  to pay John Wiley & Sons $600,000 for the scheme.

The outcome could be devastating: Whether it be online retailers like eBay and  Craigslist, thrift shops  like Goodwill and Salvation Army, or regular people  who want to hold a  garage sale, item owners would be required to get the  manufacturer’s  permission before reselling the products they own, and the   manufacturer could potentially charge a portion of the resale.

And so what do we know about Kagan aside from the fact that Obama nominated her to the court back in May of 2010? Well, we know a lot. We know, thanks to the work of Trevor Loudon, a lot more than we should. And from that, we can safely predict the outcome of this landmark case.

Now, I’m not going to do your homework for you. But, as my good friend Jeff Wright has suggested, I’m going to leave some “breadcrumbs” for you to follow, if you care to.

Who is Abner Mikva? As far back as 1949, when communist-led students went on strike at the City College of New York, 20 University of Chicago campus “leaders” met to show their support. Among them, Abner Mikva. (fourth clue).

So, if you’re still with me, and if Kagan winds up being the deciding vote on this case, guess where she’ll come out? In favor of property rights? Or not? What do you think?

Elena Kagan Obama Supreme Court
This entry was posted on Monday, October 29th, 2012 at 9:24 am and is filed under Constitution. You can follow any responses to this entry through the RSS 2.0 feed. Both comments and pings are currently closed.
Many of the articles on Light from the Right first appeared on either The New American or the McAlvany Intelligence Advisor.