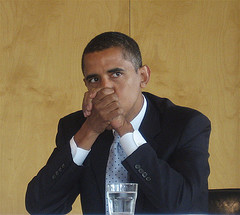 Bloomberg’s Chris Burritt reviewed the carnage on Wednesday: Ford is closing a car-assembly plant (the first one in ten years for the car-maker, with rumors of a second closing in early 2013), while Dow Chemical, DuPont and Advanced Micro Devices (AMD) have laid off 5,500 workers since the first of the year. Since September 1st, North American companies have announced plans to lay off 62,600 more. According to Bloomberg, total firings this year amount to 158,000, 30,000 more than in the same period last year.

He quotes Janna Sampson, an investment manager with $3 billion under management:

Companies are saying, “Let’s not build up inventories, let’s be lean and mean until we know until we have a better idea of what 2013 is going to look like. There is a fear now as companies see that the economic recovery is not picking up.”

Third quarter earnings reports aren’t doing well, either. Out of the 204 companies in the S&P top 500 that have reported so far, 120 of them have reported sales that were below analysts’ projections. Missing sales estimates is a precursor to laying off more people, according to John Challenger, the CEO of a human resources firm.

Hewlett-Packard announced it’s laying off 29,000 workers, while banks are planning on cutting 19,000 more.

I’m trying to find the sunshine here, but it’s hard. Every layoff entails personal pain and frustration, while impacting the economy in an ever-expanding ripple effect. People will have to hunker down, live on less, make do. What’s especially annoying is that household rules don’t apply to the government, because households don’t have a printing press in the basement, whereas the government does (i.e., the Federal Reserve).

And neither Romney nor The Big O have a clue over what to do about it. But they continue to make promises…

2012 Elections Economy Federal Reserve Jobs Mitt Romney Obama
This entry was posted on Sunday, October 28th, 2012 at 11:04 am and is filed under Economics. You can follow any responses to this entry through the RSS 2.0 feed. Both comments and pings are currently closed.
Many of the articles on Light from the Right first appeared on either The New American or the McAlvany Intelligence Advisor.