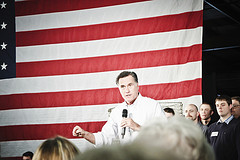 Yesterday’s reports from Rasmussen was quite encouraging, if you’re a Romney/Republican fan and are concerned about the depth and breadth of the Romney surge that even the Downstream Media are now being forced to admit.

And on Friday, Rasmussen is putting Wisconsin, a state that Obama won by 14% in 2008, as too close to call: Obama leads by 2%, within the margin of error. And the momentum for Romney continues to build.

The election could be a split decision, according to Rasmussen, with the popular vote going to Romney, but the Electoral College going for Obama, which would return him to the White House for another four years:

It’s Obama who has the edge in the Electoral College. Rasmussen Reports currently projects that the president should win states with 237 Electoral College votes. Romney has enough states to win 235. Those projections assume Florida and North Carolina end up in the GOP column — an assumption the Obama campaign contests.

To move into the White House, Romney absolutely needs to win Virginia’s 13 electoral votes. If he can accomplish that goal, he just needs to win Ohio and one other swing state to reach the magic number of 270 for victory.

Romney has never led in Ohio according to scores of public polls. The numbers in the Buckeye State so far suggest that the race is either tied or leaning slightly in Obama’s favor.

If Ohio goes for the president, Romney has a few perilous paths to victory available to him. All require him to carry Wisconsin and its 10 Electoral College votes.

So Wisconsin is one of the key states to watch on Election Day eve. Says Rasmussen:

On election night, the first places to watch will be Virginia and Florida. If Romney wins there, watch Ohio. If the president wins Ohio, Wisconsin is likely to be the decisive battleground state of Election 2012.

2012 Elections Colorado Democrat Mainstream Media Media Bias Mitt Romney North Dakota Obama Polls Rasmussen Republican Senate
This entry was posted on Saturday, October 27th, 2012 at 6:13 am and is filed under Politics. You can follow any responses to this entry through the RSS 2.0 feed. Both comments and pings are currently closed.
Many of the articles on Light from the Right first appeared on either The New American or the McAlvany Intelligence Advisor.