BATFE Empowered to Override the Constitution 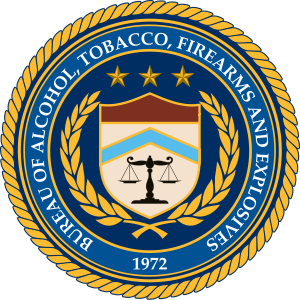 Seal of the United States Bureau of Alcohol, Tobacco, Firearms and Explosives after it moved to the Department of Justice. (Photo credit: Wikipedia)

The Justice Department under Obama is no friend of the Second Amendment. It has just issued, on its own authority, a new rule allowing the BATFE (Bureau of Alcohol, Tobacco, Firearms and Explosives) to help themselves to your guns without a warrant. As Nita Chei, a writer at the Washington Times, explains:

The Obama administration is making it easier for bureaucrats to take away guns without offering the accused any realistic due  process. In a final rule published last week, the Justice  Department granted the Bureau  of Alcohol, Tobacco, Firearms and Explosives (ATF)  authority to “seize and administratively forfeit property involved in  controlled-substance abuses.” That means government can grab firearms and other  property from someone who has never been convicted or even charged with any  crime.

What this does is dispense altogether with the need for a search warrant as required under the Fourth Amendment: “The right of the people to be secure in their persons, houses, papers, and effects, against unreasonable searches and seizures, shall not be violated, and no Warrants shall issue, but upon probable cause, supported by Oath or affirmation, and particularly describing the place to be searched, and the persons or things to be seized.” Under the rule, the items to be seized are “inanimate” and therefore have no rights.

Here’s how it works:

Such seizures are common in drug cases, which sometimes can ensnare people who  have done nothing wrong. James Lieto found  out about civil forfeiture the hard way when the FBI  seized $392,000 from his business because the money was being carried by an  armored-car firm he had hired that had fallen under a federal investigation. As  the Wall Street Journal reported, Mr. Lieto was never accused of any crime, yet  he spent thousands in legal fees to get his money back.

Law enforcement agencies love civil forfeiture because it’s extremely lucrative.  The Department of Justice’s Assets Forfeiture Fund had $2.8 billion in booty in  2011, according to a January audit.

And once they have seized your guns, you’ll never see them again:

Knowing the threat in advance is the first step in preparing for it. Just a word to the wise.

BATFE Department of Justice FBI Fourth Amendment Obama Second Amendment Wall Street
This entry was posted on Saturday, October 27th, 2012 at 1:39 pm and is filed under Constitution. You can follow any responses to this entry through the RSS 2.0 feed. Both comments and pings are currently closed.
Many of the articles on Light from the Right first appeared on either The New American or the McAlvany Intelligence Advisor.