Romney Exposes Himself (Politically, That Is) 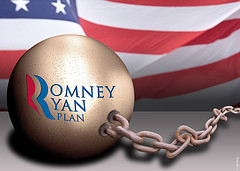 John Hawkins has, unintentionally I’m sure, done Romney skeptics like me a world of good. By taking snippets from the three “debates” of Romney’s comments, Hawkins has put to rest any idea that Romney is a conservative, or even coherent.

If I become president, I’ll get America working again. I will get us on track to a balanced budget. The president hasn’t. I will.

I’ll make sure we can reform Medicare and Social Security to preserve them for coming generations. The president said he would. He didn’t.

Clever wordplay. I don’t believe a word of it.

First, the balanced budget. Let’s see: the government is currently spending $3.7 trillion a year, and running deficits of $1 trillion. A balanced budget, to me at least, means Romney intends to cut $1 trillion out of government spending. Military spending is about $750 billion, Social Security is more than that, and then there’s Medicare, and Medicaid, and government pensions, and $360 billion on interest payments on the national debt, and …  So just where is he going to start?

“Reform Medicare and Social Security.”?  Just how does he plan to do that, exactly? With half of Americans (at least) receiving some form of government benefits from just these two welfare programs – I’m assuming that some of them vote – what are his plans to keep them happy while reforming (read: cutting) their favorite programs?

Or how about this:

Maybe his incoherency is intended?

One last one, just for good measure (Hawkins extracted 20 from the debates):

I will not reduce the share paid by high-income individuals. I know that you and your running mate keep saying that, and I know it’s a popular thing to say with a lot of people, but it’s just not the case. Look, I got five boys. I’m used to people saying something that’s not always true, but just keep on repeating it and ultimately hoping I’ll believe it — (scattered laughter) — but that is not the case, all right? I will not reduce the taxes paid by high-income Americans.

Yup. Vote for me, you rich guys, and I’ll guarantee you that I won’t reduce your taxes. How about that for a captivating campaign slogan?

Incoherent is probably the nicest word I can use to describe Romney’s comments. I could use other words but I’m told that young children read my blog.

Balanced Budget China Defense Spending Deficit Medicaid Medicare Military Social Security Spending Taxes War
This entry was posted on Friday, October 26th, 2012 at 6:10 pm and is filed under Constitution, Economics, Foreign Policy, Politics. You can follow any responses to this entry through the RSS 2.0 feed. Both comments and pings are currently closed.
Many of the articles on Light from the Right first appeared on either The New American or the McAlvany Intelligence Advisor.