Why the Electoral College? 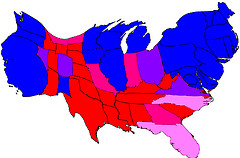 As the silly season comes to an end, the question of “Why the Electoral College?” inevitably comes up. There are arguments both pro and con, nicely outlined here.

For simplicity’s sake, I’ll just review two arguments in favor of the Electoral College. You can go to the link above for a five-page discussion in more detail.

Proponents argue that the Electoral College system contributes to the cohesiveness of the country by requiring a distribution of popular support to be elected president; without such a mechanism, they point out, the president would be selected either through the domination of one populous region over the others or through the domination of large metropolitan areas over the rural ones.

The 12th Amendment explains the process without actually using the words Electoral College. Originally the debate was about whether the states should elect the president, or the people through popular vote. This is the middle ground, reflecting the Founders’ concern about balancing the interests of populous states and regions with smaller, less populous ones.

As things stand now, no one region contains the absolute majority (270) of electoral votes required to elect a president. Thus, there is an incentive for presidential candidates to pull together coalitions of States and regions rather than to exacerbate regional differences. Such a unifying mechanism seems especially prudent in view of the severe regional problems that have typically plagued geographically large nations such as … the Roman Empire.

It’s helpful to remember that the Founders were students of history and tried to take the lessons of history to keep the American experiment from repeating the bad ones.

Here is probably the most cogent and persuasive reason to keep it:

The Electoral College system is designed to work in a rational series of defaults: if, in the first instance, a candidate receives a substantial majority of the popular vote, then that candidate is virtually certain to win enough electoral votes to be elected president.

In the event that the popular vote is extremely close, then the election defaults to that candidate with the best distribution of popular votes (as evidenced by obtaining the absolute majority of electoral votes).

In the event the country is so divided that no one obtains an absolute majority of electoral votes, then the choice of president defaults to the States in the U.S. House of Representatives. One way or another, then, the winning candidate must demonstrate both a sufficient popular support to govern as well as a sufficient distribution of that support to govern.

Did you find this brief synopsis helpful?

This entry was posted on Thursday, October 25th, 2012 at 6:44 am and is filed under Constitution, Politics. You can follow any responses to this entry through the RSS 2.0 feed. Both comments and pings are currently closed.
Many of the articles on Light from the Right first appeared on either The New American or the McAlvany Intelligence Advisor.