George McGovern: The Liberal Who Got Mugged 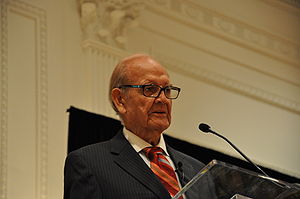 George McGovern, known for his ultra-liberal stance on issues of his day, passed away on Sunday, October 21st, at Dougherty Hospice House in Sioux Falls, South Dakota, at age 90.

Active in promoting liberal programs almost from the first, McGovern was convinced that government could be used as an instrument to improve society, especially in providing food for the poor in America and around the world. He saw the American government and the United Nations as tools to promote sustenance for them. He helped create the United Nations’ World Food Program which distributed U.S. food “surpluses” to needy people abroad, and issued the McGovern Report, which set up nutritional guidelines for Americans.

He served as U.S. Ambassador to the UN agencies for Food and Agriculture, and was appointed the first UN Global Ambassador on World Hunger in 2001.

But he is primarily remembered for losing his bid as the Democrat party’s presidential candidate in 1972 to President Richard Nixon in one of the worst political defeats in American history. McGovern lost the popular vote 38% to 61%, and the Electoral College vote 17-520. He even lost his own state, winning only Massachusetts and the District of Columbia in the race.

As a member of the House, starting in 1956, he favored government intervention in the free market, supporting his agricultural constituency in South Dakota with policies that kept commodity prices high while giving farmers subsidies and price supports, setting up grain storage programs and putting tariffs on imported beef. He pushed for federal aid to small business owners, federal aid to education, and expanded medical coverage under Social Security. He voted for the federal food stamp law and took positions favored by the liberal Americans for Democratic Action (ADA) 34 times during his tenure in the House and against them just 3 times.

Upon being elected Senator from South Dakota in 1962, he endorsed similar positions but began to make waves with his increasingly insistent opposition to the gathering momentum of the Vietnam War.

He tried to reduce military spending almost every year during the 1960s, voting against various weapons programs, including missile and anti-missile systems. He continued to support policies deemed favorable by the ADA, scoring a 92 on his votes through 1967.

Although his protestations against the war largely fell on deaf ears, his speeches would likely surprise libertarians and anti-war activists today. For instance, in 1963, in a speech on the Senate floor, McGovern said:

The current dilemma in Vietnam is a clear demonstration of the limitations of military power … [Current U.S. involvement] is a policy of moral debacle and political defeat … The trap we have fallen into there will haunt us in every corner of this revolutionary world if we do not properly appraise its lessons.

However, he voted for the Gulf of Tonkin resolution, which passed the House unanimously and the Senate with just two opposing votes, giving President Lyndon Johnson essentially “carte blanche” in pressing the war without constitutional approval. It passed congressional powers to the executive branch, and McGovern said later it is the one vote he most regretted as the war escalated.

So vehement was his opposition to the war that McGovern, in May of 1970, secured a second mortgage on his home to pay for a 30-minute panel discussion on NBC on his McGovern-Hatfield Amendment that would have ended the war by December 31, 1970. Although the amendment failed, his speech supporting it is remarkable in light of the expansion of military adventurism in the present day:

There are not very many of these blasted and broken boys who think this war is a glorious adventure. Do not talk to them about bugging out, or national honor or courage. It does not take any courage at all for a congressman, or a senator, or a president to wrap himself in the flag and say we are staying in Vietnam, because it is not our blood that is being shed. But we are responsible for those young men and their lives and their hopes. And if we do not end this damnable war those young men will someday curse us for our pitiful willingness to let the Executive carry the burden that the Constitution places on us.[Emphasis added.]

So before we vote, let us ponder the admonition of Edmund Burke, the great parliamentarian of an earlier day: “A conscientious man would be cautious how he dealt in blood.”

Following the loss of his seat in 1980, McGovern remained active in politics, even considering another run at the presidency in 1984. He maintained close ties to the far-left radical Institute for Policy Studies (IPS) and founded Americans for Common Sense as a liberal alternative to the Moral Majority and other “Christian right” groups.

In 1988, McGovern had his first brush with the real world — mugged is a better word — when he took his speaker fees generated while traveling the world on various lecture tours and purchased a 46-year lease on the 150-room Stratford Inn in Stratford, Connecticut. Within three years the inn went into bankruptcy and McGovern wrote a letter to the Wall Street Journal in June 1992 explaining why:

It’s been 11 years since I left the U.S. Senate, after serving 24 years in high public office. After leaving a career in politics, I devoted much of my time to public lectures that took me into every state in the union and much of Europe, Asia, the Middle East and Latin America.

In 1988, I invested most of the earnings from this lecture circuit acquiring the leasehold on Connecticut’s Stratford Inn. Hotels, inns and restaurants have always held a special fascination for me. The Stratford Inn promised the realization of a longtime dream to own a combination hotel, restaurant and public conference facility — complete with an experienced manager and staff.

In retrospect, I wish I had known more about the hazards and difficulties of such a business, especially during a recession of the kind that hit New England just as I was acquiring the inn’s 43-year leasehold.

I also wish that during the years I was in public office, I had had this firsthand experience about the difficulties business people face every day. That knowledge would have made me a better U.S. senator and a more understanding presidential contender….

To create job opportunities we need entrepreneurs who will risk their capital against an expected payoff. Too often, however, public policy does not consider whether we are choking off those opportunities.

It was the choking of local, state and federal rules, regulations and mandates that forced his venture into bankruptcy. He explained:

My business associates and I … lived with federal, state and local rules that were all passed with the objective of helping employees, protecting the environment, raising tax dollars for schools, protecting our customers from fire hazards, etc. While I never doubted the worthiness of any of these goals, the concept that most often eludes legislators is: Can we make consumers pay the higher prices for the increased operating costs that accompany public regulation and government reporting requirements with reams of red tape? It is a simple concern that is nonetheless often ignored by legislators.

For example, the papers today are filled with stories about businesses dropping health coverage for employees. We provided a substantial package for our staff at the Stratford Inn. However, were we operating today, those costs would exceed $150,000 a year for health care on top of salaries and other benefits. There would have been no reasonable way for us to absorb or pass on these costs.

The lesson learned in the free market came late to McGovern, too late to make an impact on his excessive confidence in the power of government to solve society’s problems. As Justice Felix Frankfurter said:

Wisdom too often never comes, and so one ought not to reject it merely because it comes late.

Bankruptcy Constitutional Democrat Free Market Health Care LBJ Liberal Libertarian Military Recession Regulations Richard Nixon Senate Small Business Spending Subsidies Surplus United Nations War
This entry was posted on Wednesday, October 24th, 2012 at 6:32 am and is filed under Constitution, Economics, Foreign Policy, History, Politics. You can follow any responses to this entry through the RSS 2.0 feed. Both comments and pings are currently closed.
Many of the articles on Light from the Right first appeared on either The New American or the McAlvany Intelligence Advisor.