The Battle for the Senate is Not Going Well 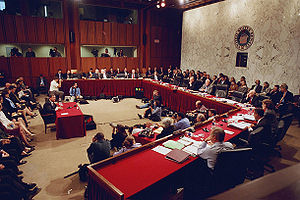 Senate Judiciary Committee confirmation hearings of John Roberts to be Chief Justice of the Supreme Court of the United States, 2005. (Photo credit: Wikipedia)

In Scott Rasmussen’s “Political Commentary” on Friday, he expressed his opinion, based on his own polls, that the GOP would not gain control of the Senate. Earlier this looked very do-able, with so many vulnerable Democrat seats available for the taking. But now? Not so much:

When 2012 began, the presidential race looked too close to call, but most analysts thought the Republicans had a good chance to win control of the Senate. The numbers were just too daunting for the Democrats. They had too many seats to defend and too many vulnerable incumbents.

Now, 10 months later, the race for the White House remains very close. But as Mitt Romney’s prospects have improved in recent weeks, it is the Democrats who are favored to end up controlling the Senate.

I have been watching the Senate races with rather more than passing interest, primarily because of the likelihood that whoever wins the presidency will have the opportunity to appoint some Supreme Court justices with “the advise and consent” [see Article II, Section 2] of the Senate. It’s the Senate Judiciary Committee that “vets” those appointees, and can either be a help or a great hindrance to getting Constitutionalists (if there be any) appointed to the court.

Rasmussen reviews some of the events which have turned the tables on the Republicans in those “vulnerable” Senate races:

This change happened in a few steps. First, Olympia Snowe announced her retirement. That shifted the apparently safe Senate seat in Maine from the GOP to Angus King. King is now heavily favored to win the Maine Senate race and expected to caucus with the Democrats.

Ever the sceptic and fact-checker, I went to the Freedom Index to see just how “conservative” Snow has been with her voting record, and how closely she hews to the Constitution. Her rating is just 56 – which means she votes against the Constitution half the time! Some conservative!

And Angus King? He was the governor of Maine for eight years, from 1995 to 2003. That’s recent enough where his name recognition is still fairly strong. He calls himself an independent. After looking at his voting record I think he is better described as a waffle, a schmoo, subject to whoever talked to him last before voting for, or vetoing, a bill. But he’s popular, and Rasmussen thinks he’ll win in a walk, and will essentially vote Democratic in the Senate. He could scarcely do worse that Snowe.

Next up: Missouri. Todd Akin had this race locked up, running against Senator Claire McCaskill (Freedom Index: a ghastly 23) until his gaffe about “legitimate rape” (which got twisted out of context) blew up his chances. McCaskill now leads Akin by 8 points, and the election is less than three weeks away.

Rasmussen, a conservative who manages to avoid “massaging” his polls to fit his ideology, says it’s almost game over for the Republicans:

That created a situation where Rasmussen Reports now projects that the Democrats are poised to have 48 Senate seats after Election Day and the Republicans will have 47. Five remain tossups, and the GOP needs to win four of them to win control (three if Mitt Romney wins and Paul Ryan gets to cast the tie breaking vote). It’s not impossible, but it’s an uphill battle.

Those five states are Massachusetts, Ohio, Wisconsin, Montana and Virginia.

2012 Elections Conservative Constitutional Constitutionalist Democrat Freedom John Roberts Mitt Romney Obama Paul Ryan Polls Rasmussen Republican Senate Supreme Court
This entry was posted on Tuesday, October 23rd, 2012 at 9:04 am and is filed under Constitution, Politics. You can follow any responses to this entry through the RSS 2.0 feed. Both comments and pings are currently closed.
Many of the articles on Light from the Right first appeared on either The New American or the McAlvany Intelligence Advisor.