Why I’m Not Voting for Mitt Romney 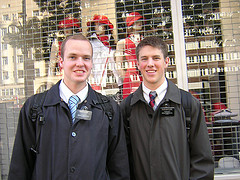 Something happened back in the fall of 1967 that altered my life immediately and eternally. Since I am the world’s foremost expert on what happened to me, this is my story:

I was 27 years old, married (to my beloved Mary) with two kids and a mortgage. It was a Saturday morning and I was working in my garage when two bright shiny nice looking young men showed up and said: “We bring you greetings in the name of our Lord Jesus Christ.”

Now at the time I was a life insurance salesman and I’d never heard an opening statement like that! It got my attention. Then they asked: “Where will you be spending your life in eternity?”

Well, I was deeply concerned about where I was going to spending the next month if I didn’t make the mortgage payment this month, and consequently had given little thought to eternity, to be honest with you.

I invited them in to the house where they began to teach me what I needed to know in order to join the Mormon church. There was a twelve-week lesson plan, with homework. It sounded attractive, with a shiny well-crafted program guide for newbies, and so I dove in. I read the Book of Mormon, the Pearl of Great Price, and much of their Doctrines and Covenants. Interestingly, and in retrospect, they didn’t have me read the Bible – something about how the Bible was valuable only as it was “properly interpreted and understood.” That was a warning light that I didn’t see.

In my eleventh week of study, prior to the twelfth and final lesson which would pave my way to baptism, I was in Denver seeing a friend, Don McAlvany. When I mentioned that I was about to be baptized into the Mormon Church, he reached around behind him and grabbed a copy of Walter Martin‘s Kingdom of the Cults, handed to me and said: “Read this before your next lesson.”

What I learned over the next several days (and nights) was a series of valuable life lessons: don’t be so trusting, reduce your naiveté, question the narrative, explore the hidden agenda, do your homework, don’t believe everything you see. And one of the most important of all: it’s easier to stay out than to get out.

The more I read, the more upset I got. Not so much with these nice Mormon missionaries, but with myself. I discovered that I had been misled, deceived and misguided, deliberately, through a system of persuasion based upon half-truths and inaccurate readings of history.

By the time the missionaries arrived for my final lesson, I took over the conversation. I had a long list of questions: who do you say is Jesus Christ? How did He get here? How many Gods are there? Are there some sins that Christ’s blood cannot atone for? And so on.

To shorten what is now turning out to be a very long blog, I didn’t get through asking them all of my questions. By about number three, as if on cue, they both stood up and walked out, saying that they had another appointment. They left, and to this day I’ve never heard from them or, for that matter, anyone else from the Mormon church. That was 46 years ago.

What does that have to do with my not voting for Mitt Romney? Simple. If he can buy into what is a provably false, fake, fraudulent and deceitful religion – if he follows, on the most fundamental level, the teachings of a phony faith – how could I possibly trust him to make right and good decisions on lesser matters?

2012 Elections Insurance Religion Spending
This entry was posted on Tuesday, October 23rd, 2012 at 1:57 pm and is filed under Politics, Religion. You can follow any responses to this entry through the RSS 2.0 feed. Both comments and pings are currently closed.
Many of the articles on Light from the Right first appeared on either The New American or the McAlvany Intelligence Advisor.