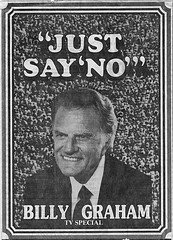 In his political pilgrimage to see evangelist Billy Graham and attempt to secure his endorsement, Mitt Romney traveled to Montreat, North Carolina on October 11th to visit the aging and declining Graham. The statement issued by Graham following the meeting had just enough in it to make it sound like an endorsement:

It was an honor to meet and host Gov. Romney in my home today, especially since I knew his late father former Michigan Gov. George Romney, whom I considered a friend.

I have followed Mitt Romney’s career in business, the Olympic Games, as governor of Massachusetts and, of course, as a candidate for president of the United States. What impresses me even more than Gov. Romney’s successful career are his values and strong moral convictions. I appreciate his faithful commitment to his impressive family, particularly his wife Ann of 43 years and his five married sons.

It was a privilege to pray with Gov. Romney—for his family and our country. I will turn 94 the day after the upcoming election, and I believe America is at a crossroads. I hope millions of Americans will join me in praying for our nation and to vote for candidates who will support the biblical definition of marriage, protect the sanctity of life and defend our religious freedoms.

Of course this is what Romney wanted: just enough of an endorsement to push those few remaining undecideds who still think religious values have some meaning in secular America to his side on November 6th.

The only problem with this whole charade of course, is that Mormonism isn’t Christianity, and Graham knows it. An article published in Decision magazine, a part of the Billy Graham Evangelistic Association, in 2008, written by Philip Roberts, the CEO of LifeWay Resources, was clear: “Mormonism is clearly, absolutely, completely, and thoroughly a ‘religious cult.'”

This is made clear by Walter Martin in his Kingdom of the Cults which is considered to be the authoritative reference work on religious cults for more than 40 years.

What is that old saying? Politics makes strange bedfellows.

2012 Elections Christian Freedom Mitt Romney
This entry was posted on Tuesday, October 23rd, 2012 at 11:51 am and is filed under Politics, Religion. You can follow any responses to this entry through the RSS 2.0 feed. Both comments and pings are currently closed.
Many of the articles on Light from the Right first appeared on either The New American or the McAlvany Intelligence Advisor.