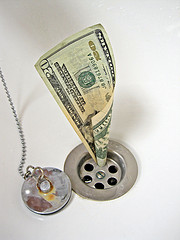 For each of the past three years, Senator Tom Coburn (R-Okla.) has published his annual Wastebook, and each year the press has had a field day digging into the 200-page report to expose the most outrageous, wasteful, and annoying projects Congress is funding with taxpayer monies. In 2010, for instance, Coburn’s report noted that $200,000 went to research that studied why political candidates “make vague statements,” while his 2011 report exposed squandering of $700,000 to study cow burps, robot dragons, and “bridges to nowhere.”

Fox News considered these to be “highlights” in the 2012 edition:

Coburn appears to be the right man for the job, as he seems to have steered clear of supporting any obvious “highlights” of his own. He is known in the Senate as

“Dr. No” for his tendency to vote against these measures, and has also used “holds” to prevent various other pernicious spending bills from ever coming to the Senate floor for a vote.

In the Freedom Index issued by The John Birch Society, which rates congressmen based on their adherence to constitutional principles of limited government, fiscal responsibility, national sovereignty, and a traditional foreign policy of avoiding foreign entanglements, Coburn was one of just 10 senators earning a perfect score of 100 in its latest scorecard.

Coburn’s 2012 report took special umbrage at how professional sports teams are treated by Congress. The National Football League (NFL), the National Hockey League (NHL), and the Professional Golfers’ Association (PGA) are classified as non-profit organizations which are clearly in business to make a profit. But they have managed to manipulate the rules so that they pay no taxes, and Congress has allowed them to get away with it.

For instance, in 2010 the NFL had revenues of $184 million from its member teams and has over $1 billion in assets. As the report notes:

Together with its subsidiaries and teams — many of which are for-profit, taxed entities — the NFL generates an estimated $9 billion annually. [Emphasis added.]

Almost half of [those] teams are valued at over $1 billion.

And the NFL is generous to a fault. Roger Goodell, the NFL’s current commissioner, earned nearly $12 million in 2010 and is expected to be earning $20 million by 2019. Former NFL commissioner Paul Tagliabue earned $8.5 million in 2010, while the league expressed its appreciation financially to five other NFL top officials with total compensation to them reaching nearly $20 million in a single year.

The cost to the American taxpayer for such “professional courtesy” by Congress granting tax-exempt status to these obviously for-profit businesses exceeds $90 million annually, according to Coburn.

It isn’t that Coburn is against professional sports. What he is against is the fact that these business enterprises don’t pay any taxes when the rest of the taxpayers do. In his introduction to Wastebook 2012 Coburn asked:

As you look at these examples, put your personal political persuasion aside and ask yourself: Would you agree with Washington that these represent national priorities, or would you conclude these reflect the out-of-touch and out-of-control spending threatening to bankrupt our nation’s future?

The top of the list of the 100 most wasteful programs, however, according to Coburn, belongs to Congress itself. He decries the inability of Congress to get anything done: Committees don’t meet, Senators don’t offer legislation, and they spend more time raising money for their reelection campaigns than they do governing. This lackadaisical attitude towards the pending financial disaster facing the country doesn’t seem to bother anyone in Washington and has resulted in its “lowest public approval in … nearly four decades,” according to the report.

The Senate Budget Committee, for example, hasn’t passed a budget since April 29, 2009, during which time Washington “spent $11.2 trillion and added more than $4.8 trillion to the national debt.” And it hasn’t even tried, according to Coburn: it’s only held 12 committee hearings in all of 2012, “fewer than all but five other congressional committees from both chambers.”

He notes a complete lack of interest in upholding and defending the Constitution, putting almost every member of Congress in violation of their oath of office. Coburn is right:

Article 1, Section 9 of the U.S. Constitution entrusts Congress with the responsibility to approve how money is spent out of the Treasury and to account for such expenditures. Congress approved every cent spent to fund the projects outlined in this report and did nothing to stop any of these expenditures. In fact, in many cases members of Congress actually took credit for the projects with no shame.

All of the outrageous and wasteful contents of this report were made possible by either the action or lack of action of Congress, earning it the well-deserved but unwanted distinction as the biggest waste of taxpayer money in 2012.

Constitutional Deficit Foreign Policy Freedom John Birch Society National Debt Senate Spending Taxes Tom Coburn
This entry was posted on Monday, October 22nd, 2012 at 6:04 am and is filed under Constitution, Economics, Politics. You can follow any responses to this entry through the RSS 2.0 feed. Both comments and pings are currently closed.
Many of the articles on Light from the Right first appeared on either The New American or the McAlvany Intelligence Advisor.