The Entitlement Society: Caviar with Chains 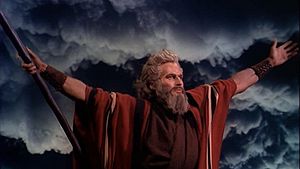 Cropped screenshot of Charlton Heston from the trailer for the film The Ten Commandments. (Photo credit: Wikipedia)

Pastor Chuck Baldwin nails it: the entitlement society destroys morality. We are enjoying the fruits of the Stockholm Syndrome which is where the prisoners fall in love with their captors.

As a preacher, Baldwin can’t resist the temptation to reach into Scriptures to tell us that we’ve been here before:

There is an Old Testament story that parallels with what is going on in America today. The story is found in Numbers chapter 11. God had delivered His people from great bondage. They witnessed His mighty hand of power and deliverance in defeating their oppressors and leading them toward a land of promise and liberty. He even dropped “angels’ food” (called manna) from Heaven to sustain them.

But after being delivered from bondage, they began to yearn for a return to Egypt. In verse 5 of that chapter, the people are recorded as complaining, “We remember the fish, which we did eat in Egypt freely; the cucumbers, and the melons, and the leeks, and the onions, and the garlick.” (KJV)

Return us to slavery! At least then we have security and predictability and someone else providing for us. This eliminates our need to fend for ourselves and run the risks of failure and the demands of personal responsibility. Here’s Baldwin:

In the wilderness, there was risk, uncertainty, and potential failure. They had to depend totally on divine Providence. They could not see what the morrow would hold. There were no guarantees, no entitlements, and no assurances. And even though God had delivered them with great power, sustained them daily with manna, and promised them a land of freedom of their very own, they lusted after security. To them, security was more important than liberty.

Baldwin quotes Benjamin Franklin with one of my all-time favorites:

They who can give up essential liberty to obtain a little temporary safety, deserve neither liberty nor safety.

Chuck Baldwin Egypt Entitlements Freedom Liberty
This entry was posted on Monday, October 22nd, 2012 at 9:04 am and is filed under Constitution, Economics, History. You can follow any responses to this entry through the RSS 2.0 feed. Both comments and pings are currently closed.
Many of the articles on Light from the Right first appeared on either The New American or the McAlvany Intelligence Advisor.