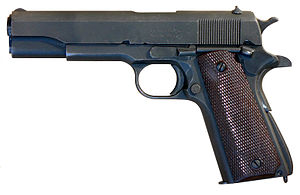 Here is another example, exasperatingly but predictably missing from the nightly news, of how the Second Amendment saves lives. Imagine what went through this 12-year-old girl’s mind when a thug entered her home after kicking in the back door. Imagine what would go through yours if one entered yours.

Here is what happened:

Frantically, she called her mother who advised her to grab their household gun, hide in the closet, and call 911.

The intruder made his way through the house, and as he was opening the door of the closet, the young girl shot him through the closet door. The intruder left the house and the girl was found unharmed. The police arrived and took the man into custody.

Here is what Wikipedia says about the Colt Model 1911 semi-automatic pistol:

The M1911 is a single-action, semi-automatic, magazine-fed, recoil-operated handgun chambered for the .45 ACPcartridge, which served as the standard-issue side arm for the United States armed forces from 1911 to 1985. It was widely used in World War I, World War II, the Korean War, and the Vietnam War. The M1911 is still carried by some U.S. forces. (emphasis mine)

Consider that: the 1911 was used by the US armed forces from 1911 to 1985!  And it is still used today, and considered by many to be the standard against which everything else is measured. John Moses Browning‘s design was so advanced that many military and law enforcement groups still use it

And, presumably, a 1911 was used by this 12-year-old girl in Bryan County, Oklahoma, to protect herself. She called 911 and used her family’s 1911. Celia Bigelow, the writer at Townhall.com, says she won’t allow herself to go unarmed. Good for her:

We will never understand why people go out of their way to harm others, but we have a constitutional right to defend ourselves. We must stand by the Constitution and remember this: guns don’t kill people. People must make the decision to kill others. If I were to ever be in a similar situation as the 12-year old Oklahoma girl, I wouldn’t want to be found empty-handed.

Constitutional FBI Gun Control Military Second Amendment War
This entry was posted on Monday, October 22nd, 2012 at 3:04 pm and is filed under Constitution. You can follow any responses to this entry through the RSS 2.0 feed. Both comments and pings are currently closed.
Many of the articles on Light from the Right first appeared on either The New American or the McAlvany Intelligence Advisor.