The Second Presidential Debate: Duel of the Dunces 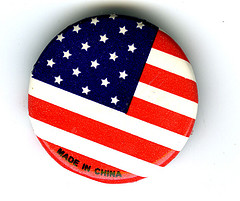 made in china (Photo credit: mandiberg)

I didn’t watch the second presidential debate between Mitt Romney and Obama. I had something more important to do: ironing pillowcases and doing some laundry.

But my friend (I’ve never met him but I like him) Donald Boudreaux did. And he just had to write a letter to The Wall Street Journal to vent:

Each man insists that America’s economy can be harmed by inexpensive imports – in other words, harmed by opportunities for voluntary exchanges that lower Americans’ cost of living.

He starts with Romney:

By promising to raise taxes on Americans who buy Chinese-made goods, Mr. Romney again promised to break his campaign promise to not raise taxes.  That he is unaware of the contradiction isn’t promising.

I must interject here: Romney is following the advice of his CFR-tainted foreign policy advisors. Here is enough information to prove that point. Economically, his CFR advisors are trained in Keynesian economics, so at least they’re consistent – wrong, but consistent.

But Romney has no corner on economic ignorance:

Mr. Obama is no better.  He bragged that he “saved a thousand jobs” with his “tough” trade action that – by raising taxes on Americans who buy Chinese-made tires – ensured “that China was not flooding our domestic market with cheap tires.”

If creating more jobs in U.S. tire factories justifies forcing consumers to pay higher prices for tires, the Obama administration should also outlaw the sale of used tires (which, like low-priced imports, are “flooding our domestic market”).  Indeed, the president should seek legislation mandating that all rubber used to make tires be non-vulcanized.  The resulting decline in tire durability will create even more jobs in U.S. tire factories by “protecting” our market from being “flooded” with cheap tire durability – that is, with tires that last for tens of thousands of miles before needing to be replaced.

The duel of the dunces. That’s why I had more important things to do on Tuesday night.

2012 Elections China Donald Boudreaux Economy Foreign Policy Jobs Keynesian Mitt Romney Obama Taxes Wall Street
This entry was posted on Sunday, October 21st, 2012 at 3:09 pm and is filed under Economics, Politics. You can follow any responses to this entry through the RSS 2.0 feed. Both comments and pings are currently closed.
Many of the articles on Light from the Right first appeared on either The New American or the McAlvany Intelligence Advisor.