A Reminder of How Tenuous the Second Amendment Is 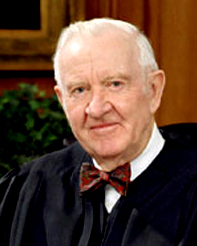 Former Supreme Court Justice John Paul Stevens spoke on Monday in Washington at a luncheon hosted by the virulently anti-gun group, the Brady Center to Prevent Gun Violence, and reminded us of just how tenuous the hold the Supremes have on our precious Second Amendment rights.

Stevens wrote dissents to both of the Court’s recent decisions supporting those rights, and noted that even Justice Scalia in his assent to those decisions, Scalia “left the door open to regulations regarding who can carry guns and where, and what kinds of guns are lawful.”

Stevens added: “The fact that Congress doesn’t address [gun violence], I find mind-boggling, to tell you the truth.”

Alan Gottlieb, chairman of the Citizens Committee for the Right to Keep and Bear Arms (CCRKBA), clarified:

In both of his dissents, Justice Stevens contended that the right to keep and bear arms was limited to state militia service. It was, and remains, an astonishing position on a fundamental civil right.”

Justice Stevens is another extraordinarily important and powerful voice calling on our elected officials to take action – one of many we have heard from, from across the country and across the political spectrum, since the wave of mass shootings this summer. His remarks today are part of a real national conversation that has begun among the American people who know that we are better than a nation with 32 more gun murders every day, and are calling for real plans from their elected officials to do something about it.

Here’s where we’re going with this. When Stevens retired in June 2010 he was replaced with, who else, liberal Elena Kagan, who has close ties to the radical communist left in Chicago (for proof, see pages 544, 550, 551, 557, 563, 565 and 567 in Trevor Loudon‘s amazing biographical dictionary of the left, “Barack Obama and the Enemies Within.”)

A liberal, anti-gun majority could easily narrow, rather than expand, the scope of our Second Amendment. That’s why it is, and always will be, important for gun owners to have a pro-gun-rights president and a pro-gun majority in the Senate, especially on the Judiciary Committee  [which holds hearings on Presidential appointments to the Supreme Court]. (my emphasis, as always)

Drowned out by all the irrelevant noise over the presidential “debates” is this essential truth: the real battle over the Second Amendment is in the Senate.

Antonin Scalia Elena Kagan Gun Control Liberal Obama Regulations Second Amendment Supreme Court
This entry was posted on Friday, October 19th, 2012 at 3:05 pm and is filed under Constitution. You can follow any responses to this entry through the RSS 2.0 feed. Both comments and pings are currently closed.
Many of the articles on Light from the Right first appeared on either The New American or the McAlvany Intelligence Advisor.