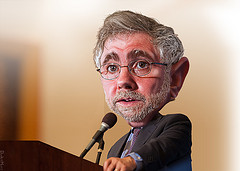 Economist Paul Krugman has impressive credentials which, if one looks closely, makes him qualified to expound the virtues (if any) of Keynesianism. He’s written 20 books and has had 700 articles published in the New York Times, including this one. What’s annoying to me is that he used to have a brain that saw things clearly, and then something happened along the way. He now comes up with the idea that not having enforced socialized healthcare kills people:

The reality, to which Mr. Romney is somehow blind, is that many people in America really do die every year because they don’t have health insurance.

You see where I’m going with this. His ideology forces him to make dumb statements that he can’t back up, but that’s OK because he knows he’s right. And that’s sufficient for all manner of interference and manipulation of people who otherwise wouldn’t make good decisions: like deciding to go without health care.

Let’s see how foolish this is. A fellow has a new car, but fails to have it serviced. It’s only a matter of time before something breaks and forces him to get towed to a service station. But Krugman says this fellow must be saved from his bad decisions, that the government must mandate that he buy auto repair insurance, otherwise the roads would be littered with broken down vehicles! Not only would that be bad for the environment, it would be dangerous to the health of other drivers who have to watch out for these disabled, vacant, rusting hulks blocking the roads.

‘Nuff said. Krugman is a statist. If he thinks the government should do something, he’s the man to support it. regardless of any evidence to the contrary.

Health Care Healthcare Insurance Obamacare Paul Krugman
This entry was posted on Friday, October 19th, 2012 at 11:50 am and is filed under Constitution, Economics, Politics. You can follow any responses to this entry through the RSS 2.0 feed. Both comments and pings are currently closed.
Many of the articles on Light from the Right first appeared on either The New American or the McAlvany Intelligence Advisor.