Obama earns an “F” from the National Rifle Association 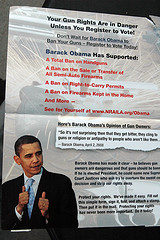 This falls into the category of “so what else is new?” Of course the National Rifle Association (NRA) gives Obama an “F” because they have looked at his legislative record going all the way back to 1996, including his denials and dismissals concerning where he really stands on gun ownership and the Second Amendment.

Most people familiar with his record might be surprised, however, at just how consistently anti-gun (anti-freedom) he really is. Here’s a quick summary that answers the question about his “F” rating:

Barack Obama’s presidential campaign has worked to assure uneasy gun owners that he believes the Constitution protects their rights and that he doesn’t want to take away their guns.

But before he became a national political figure, he sat on the board of a Chicago-based foundation [that would be the Soros-funded Joyce Foundation] that doled out at least nine grants totaling nearly $2.7 million to groups that advocated the opposite positions.

The foundation funded legal scholarship advancing the theory that the Second Amendment does not protect individual gun owners’ rights, as well as two groups that advocated handgun bans. And it paid to support a book called “Every Handgun Is Aimed at You: The Case for Banning Handguns.”

Why did the NRA give Obama an “F” rating? Simple. He deserves it.

Fast and Furious Freedom Gun Control Military National Rifle Association NRA Obama Second Amendment Supreme Court Treaty War
This entry was posted on Friday, October 19th, 2012 at 5:10 pm and is filed under Constitution, Politics. You can follow any responses to this entry through the RSS 2.0 feed. Both comments and pings are currently closed.
Many of the articles on Light from the Right first appeared on either The New American or the McAlvany Intelligence Advisor.