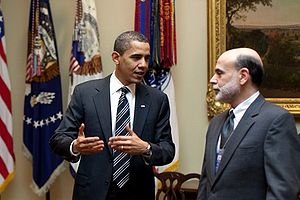 Graham Summers, writing for ZeroHedge, has pointed out that Fed head Ben Bernanke hasn’t done any new buying of securities despite his promise to do so back in September. The Fed publishes its balance sheet. You can see it here, in graphical form. As Summers said, if Bernanke was buying, how come the measure of money – the adjusted monetary base – is declining?

Would Bernanke lie? Oh, no!

The stock market jumped up nicely at the news, but has retraced most of those paper gains. Maybe the market has figured it out: it was all talk. All hat and no cattle.

The Fed balance sheet is DOWN $50 billion year over year. This confirms that the Fed has in fact been engaging in mostly verbal intervention over the last year rather than actual monetary intervention.

The implications of this are of major import.

So the correction in stocks that began last week just might continue and in fact possibly accelerate. But there’s more:

A second implication concerns the multi-trillion Dollar question: whether the Fed has in fact used up its gunpowder with all of its monetary schemes. After all, the market is roughly break-even since the Fed announced QE3. Could it be that the market is no longer reacting to Fed action?

That’s a major blow to Keynesian theory: that juicing the money supply will juice the economy. If Summers is right, and I think he is, then Bernanke will achieve nothing by buying more government securities, except water down the currency further. And so Bernanke is using the only other tool in his arsenal (the word arsenal way overstates the matter) – words. And for a brief time, it seemed to work, as far as the stock market was concerned.

Summer concludes:  “The tide may in fact be turning regarding the success of the Fed’s actions in pushing stocks higher.”

What a sham and a farce.

Ben Bernanke Central Bank Currency Economy Federal Reserve Keynesian Money Supply Obama Quantitative Easing Stock Market
This entry was posted on Thursday, October 18th, 2012 at 3:21 pm and is filed under Economics. You can follow any responses to this entry through the RSS 2.0 feed. Both comments and pings are currently closed.
Many of the articles on Light from the Right first appeared on either The New American or the McAlvany Intelligence Advisor.