James Dobson Thinks Every Christian Should Vote, Regardless 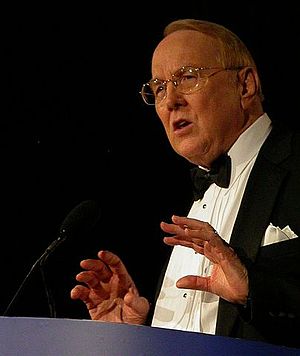 Vote, and take a friend with you, for the sake of our children.

The nation “is … in a moral and spiritual free fall.”

“Given the state of the world and the decline of our country, how can a single Christian stay at home on Election Day? The stakes are simply too high.”

According to the article at WND (WorldNetDaily), 30 million Christians didn’t vote in 2008, and Obama won by 10 million votes. Do the math! Dobson says, in not quite so many words, that Obama is the fault of those Christians who didn’t vote.

If you’re among those eligible voters who haven’t determined whether you’ll even bother to make your voices heard on Election Day, I want to urge you – in the strongest possible terms – to rethink your position!

In a sense, every election is a “crossroads,” especially when it involves the selection of national leadership. Whether directly or indirectly, our president, congressmen and senators will establish life and death policies on our behalf and our children.

These decisions will have an impact long after our elected officials have left office. In the following quadrennial, for example, the next president may make at least two appointments to the U.S. Supreme Court. If confirmed, each of them will be appointed for life. Given the unprecedented power of the court today, the selection of those justices could have a profound effect on the country for decades.

The article ended with this quote from Edmund Burke: “All that is necessary for the triumph of evil is for good men to do nothing.”

I think there’s a lot more to be said on the matter. But I’d like to hear feedback from you. Does Dobson make sense here? Are you going to vote in November? If so, why? If not, why not? I think you know my position. I’d like to hear yours.

2012 Elections Christian Liberty Obama Religion Supreme Court
This entry was posted on Thursday, October 18th, 2012 at 7:05 am and is filed under Politics, Religion. You can follow any responses to this entry through the RSS 2.0 feed. Both comments and pings are currently closed.
Many of the articles on Light from the Right first appeared on either The New American or the McAlvany Intelligence Advisor.